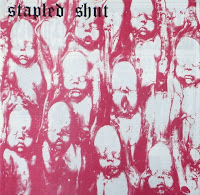 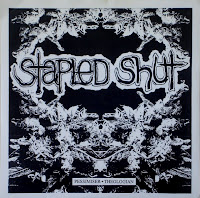 Blasting the Lack of Interest/Stapled Shut 7" again after so many years re-piqued my interest in both bands. Since Stapled Shut are the lesser known, and never released an LP or even a split LP (that I know of), they are the perfect post candidates for a blog like this. SS (sorry that's just their abbreviation) finished their career playing infectious and simple thrash with fast d-beat drumming and simple riffs, played through fuzzy distortion that was as dirty as the most soot-encrusted freeway sign in LA. The band managed to make this formula powerful and interesting through tight playing and short songs. That split with Lack of Interest and the EP posted here, "World of Noise" (Clean Plate Recs, 1996?) represent this climactic point of SS's life, and are therefore recommended to be played first. Being such a generous dude, I have also loaded their tracks from the Despise You/Stapled Shut split EP, and tracks from three different comps into the folder below. I'm not sure if those are all the comp tracks they ever did, but they are the only ones I know about (The Despise You tracks were left out because you can find those with good sound quality here, there, or even maybe over there). Stapled Shut never supplied lyric sheets, but based on the song titles, they are either about how fucked up the world is, or about gettin' stoned. So if either of those sentiments fit your mindset today, Stapled Shut has composed the score...

Stapled Shut EP, Split EP Tracks, Comp Tracks
Stapled Shut/Lack of Interest split 7" (in case you missed it before)
Posted by Batguano at 9:46 AM

Just found your blog. Stapled Shut RULES!!! I have all of the vinyl you posted but it's nice to have them all in one convenient package. I even still have the patch from the "World Of Noise" EP.

Thanks for the memories....

Hey Steve... over 50 people have downloaded this file but you're the first to comment! Thanks for doing that. I love Stapled Shut's later stuff the best. It totally gets me going. I don't recall my copy of the EP coming with a patch, though... maybe it was limited or something.

all i have had is the stapled shut ep. Bought it in the used bin. the cover art made me buy it. but what a find! thankx now I know what to look for in the used bin. awesome post. (btw) I just found your blog yesterday, i will follow!

Yo man first off thanx somuch for the rukus, I only heard of stapled shut through the despise you split, but they are one of my favorite bands now thanx for their stuff. Also the the suicidal cover by despise you was fukin gross, along with the cry now cry later /Reality comps.

I've been looking for stapled shut's lyrics like a mother fucker, I even found the stapled shut/ despise you split and there were no lyrics for "resin Heaven" inside. I'd really appreciate it if you helped me out, if not its cool you've given me some jewels on your blog.

Hey dude, I would be the first to volunteer to help you out with that, but...

I have almost everything by these guys and none came with lyrics. The 7" for example states inside to "write for lyrics" and the demo tape was pretty much the Gasp demo with Stapled's demo recorded on side B. I guess those stoners didn't think lyrics were important?!

Anyway, happy you found some tunes to crank! Enjoy.

Awesome Band , thanks for this , cheers from broken britain

a band not many have shared in listening, i saw them a couple years back and smoked out tuff, love these releases!

hello. Can you please re-up stapled shut and lack of interest split. Pleasee..

Sure can. Check the link now... it should work. Thanks.