Unauthorized Duplication is the Obvious Solution! 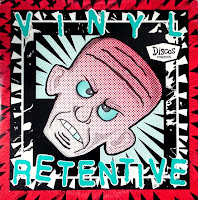 Before we dig into today's auditory buffet, I'd like to point out that commenter and all around stand-up guy, Javier, has done us a huge favor by uploading Logical Nonsense's rare "Deadtime" LP. This album is incredible, and may even be a little surprising (in the vocals department) for those of you familiar with LN's later work (Green Day meets Napalm Death... um, no). Thanks again for doing that Javier!

As foretold, the arrival of "Vinyl Retentive" on compressed digital files is here! This massive comp. is one of a handful that shaped my musical world during my late teens, for better or for worse (along with some of the early Lookout! collections and so forth). On a comp. of this magnitude (33 bands), you're bound to dislike or even hate some of the tracks, especially considering the diversity presented herein. One thing is for certain: this is a unique ride indeed, the peaks and valleys of which range from the bizarre as fuck (Pounded Clown), to the silly as fuck (Horny Mormons), the catchy as fuck (Nar), the twisted as fuck (Lizards), all the way to, of course, the awesome as fuck (Econochrist). Some other "big" names include Buzzoven, Logical Nonsense, Grimple, Pinhead Gunpowder, Gr'ups, and Schlong. The sides of each of the two LPs seem to be organized loosely around the featured bands' styles: sides A and D contain most of the melodic, poppy punk bands (with tons of variation within that genre), side B presents the groovy, progressive rock/metal bands, and side C delivers the angry, heaviosity! There's tons of fun to be had here, so grab your favorite mind altering substance (or don't), and crank it loud!

Note: I didn't realize just how many times I have spun this beast in years past. It really shows in the crackley background noise. I did what I could to counter this, but it still sounds... rustic. Sorry about that. Or maybe I'm not. This is "Vinyl Retentive" after all (emphasis on the vinyl); perhaps this is as it should be (Maybe I should've named this post Vinyl Expulsive). Each pop and crack is a memory of mine coming loose...

DAMN!!! FUCK COMPUTERS...!!! i had written a comment two miles long about vinyl retentive and all of a sudden, hit the wrong key and... it's gone, dissapeared right in front of my eyes.. fuck...
anyway, download this... DOWNLOAD IT!!! you really have no idea what you're missing... different people with different musical tastes will find something to enjoy in here, while some of us lucky ones will love the whole fucking thing from start to finish, including the intros and outros (except maybe for voodoo glow skulls... jejeje)...
anyway... royal scam, 3 finger spread, false sacrament... they all sound great... so do yourself a favor and download vinyl retentive and take a minute to thank batguano for ripping this masterpiece...
later
javier

ps... this is not a music sampler put out by a company trying to promote their shitty artists, this is compilation. it makes sense not because all the bands sound the same, but because they all sound different and they're all punk and they all kick ass. this is, in my opinion, the best punk compilation ever!!!

Hey Javier,
Thanks for trying to encourage the skeptics. From the download stats, the 13 or so readers of this blog don't seem to do well with variety. Even if they do check it out, there's a huge chance they won't "get" the "genius" of it (in other words, like it). Doesn't matter though, I'm gonna continue posting MORE variety in the future!

As far as Voodoo Glow Skulls is concerned, I do have one thing to thank them for... I went to see them as a dumb kid, and ended up getting to see Jawbreaker for the first time. Great experience!