I Can't Seem to Get the Grimple Out of My Ass! 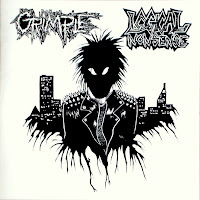 I must have been a Bay Area resident in a past life. Half the bands I love (from the US) are from somewhere in Nor-Cal. Since I don't believe in transmigration of the soul, I'll have to conclude and accept that there's just a ton of great bands up there, and not many down here (how I wish that weren't true!). Grimple were a great example of the Oakland punk greatness I love, exuding the infectiousness of Berkeley punk of the late eighties, and the ferocity of street-punk and hardcore. Their "Grimple Up Your Ass!" LP is a plasma-ball of energy, absolutely exploding with power, grit, and snot! Those tracks are readily available and recommended, as are the not-quite-as-easy to find tracks on their split with Logical Nonsense (East Bay Menace Records). These later tracks were, I believe, released on a discography CD which is out of print. By this point (1993), Grimple's approach changed a little (not for the better or for the worse necessarily... it just changed) adding a more serious, political, metallic, and, I daresay, crusty dimension. Part of this was probably just an internal musical evolution, but was also perhaps influenced by the bands they were playing shows with (and doing a split with!). These nine tracks are an essential part of their discography (there's a great Celtic Frost cover too!), so here are some high bit-rate rips for you (below)!

And we can't neglect Logical Nonsense, who on this disc offer seven earlier examples of their dark and menacing metal punk. Here the band displays a slightly closer kinship to crust punk than to the Neurosis-metal that would become the signature of their later full lengths. The gruff and pained vocals, as well as the jangly Bay Area bass lines are the big attraction for me, and are the main source of the power and lasting impression of these tracks. All you apocalyptic punk types are gonna love this stuff! There are five listed tracks on the CD, but as bonuses the band included a re-recorded version of "Pig's Blood Blues" (from the "Vinyl Retentive" Comp.) and an atmospheric spoken word piece.

Fuck. I all but forgot about this split. Don't worry we have a fair share of bad bands up here to balance things out.

Fuck... Yeah... The Grimple side of this split is one of the best things ever! I have it on vinyl but I'm stoked to be able to listen to it on the computer.

This is probably my favorite stuff by Logical Nonsense too, though I'm not as wild about them. Maybe it was just the weird UFO/Alien theme that they got into on the later records that turned me off :)

Not really related to this post, but thanks for the Saké stuff and Plutocracy/Phobia split.

Aesop- thanks for the attempt at consolation!

dhd- Glad to help out. I agree with you on almost everything (I go back and forth trying to choose my favorite Grimple record, though).

zmaj- You're very welcome. In fact, all comments are welcome, no matter where they spring up! I visited your blog for the first time today. You post some really great stuff! Thanks for the link too.

hmmmm... believe it or not i was listening to this record earlier today, and now i see it here... what a coincidence...

a true gem... i don't remember how a tape with en early version of this split came into my hands like three years before it actually came out. grimple's side was the same, but i think logical nonsense rerecorded some songs, and it had a different spoken word track... i'll try to find it, i must have it somewhere... anyway, i'd say this is grimple at its best (specially songs like system fuckers or pc), but i dunno about logical nonsense... everything they ever put out was amazing. from their split with 23 more minutes or the first lp deadtime, to expand the hive, soul pollution and this split with grimple. they are all a great example of the continuous transformation of the band... each record kicking ass as much as the other...

great to see justice is finaly being made for these bands in the blog world...

ps-vynil retentive... now that's something i'd like to see posted... anyware... i'm not sure if a cd version came out or was it just rumors

Javier- I'm curious about that mystery tape. If you find out more, keep us posted!

I have "Vinyl Retentive" (on vinyl of course) and was planning on posting it one of these days. Been putting it off for an obvious reason (2xLP comp = ripping nightmare). Some time in the next 2 weeks...?

Oh hey, thanks for the link exchange. ;)
Yeah, the Swarrrm/Muga split kicks ass. I'm happy to hear someone enjoys it that much haha.
You don't happen to have that split with Dimlaia somewhere, do you? I haven't been able to track it down on the net, it's easy to find on ebay though.

just d/l the "covers" mix-tape...liked a lot,are you gonna do anymore mixtapes? easy way to discover new/old bands. Anyway keep up the good work,believe me it is appreciated.

Zmag- sorry for the overdose of enthusiasm... I was really stoked to find that CD! I'll try to rip the Dimlaia split by tomorrow and I'll leave the link in the Muga/Swarrrm comment box. I don't want to post it here yet because a lot of distros still have it for sale.

Kiwi- I'm glad you liked the mixtape- I was very happy with how it turned out too. I intend to do more, but very sporadically. I actually have #2 in the chamber for this week, but it's another heavy labor of love that's taking some time to put together. I appreciate the feedback!

@ batguano: thanks a lot! And yeah, if I upload something that I know is easily available from a distro I try to at least mention it and/or link to the distro.
Though I think a lot of bands probably support file sharing too.

Thanks so much for this. have it on vinyl right here too! really happy to have this to rock out to on my mp3 player. aaaahhhh the memories come flooding back... Please tell me someone plans on sharing a decent quality rip of Logical Nonsense's Dead Time LP. that album is fuking impossible to find and I remember loving it!

Glad to help out! I would definitely post that LP if I had a copy! Sounds like one I need to track down pronto!

i have deadtime on vynil... i just don't have a way of transfering it to a digital format... but i found an mp3 version of the album a while back on the internet... i can post it for you. unfortunatelly the ripping has some errors, but you still get the magic of such a great band and such a great album

i ordered deadtime through blacklist mailorder like 15 years ago... i still remember the review said something about logical nonsense being a mix of green day and napalm death. it blew my mind the first time i heard it and it still blows my mind when i listen to it... so many years and the album is still as angry, and emotional and inspiring and made so much sense then as it does now.
great collaboration with grimple's vocalist on their dead silence's cover "mad scientists ball" and so many great songs like "cerebral holocaust", "a flower in a sea of shit" or my favorite "stitches"... anyway... enjoy and sorry about the few ripping errors (it still sounds great)...

Thanks for posting this!

I've had these tracks downloaded for a while, but before then I owned the discography. From what I've heard, it was quickly shelved after a few got out, because of a misprint on the CD. Instead of the tracks it was supposed to have, the last few were accidentally replaced by the Logical Nonsense ones on this split.

Yeah, after posting this, I read something similar to that on another blog. Hard to believe a label could screw up that badly!