The Cover Songs Strike Back! 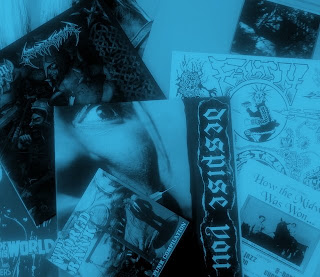 I had such a great time making the last Mixtape, I decided to make one more (final?) cover song collection. It tickles me to no end hearing crust and grind legends like Nausea and Crossed Out sharing the same musical space as my "guilty pleasures" like Friction (US) and Car vs. Driver! Some favorite bands from the last Mixtape make a repeat appearance, but the only repeat song is the Stooges' "Search and Destroy," this time by Terveet Kädet (if you haven't heard the version by Cursed, I highly recommend downloading the first mixtape). The emphasis this time around is on variety in order to keep this 22 track leviathan rockin' your sonic world from beginning to end. Thanks to the commenters on the last mixtape post who gave encouragement and feedback. This one's for you, and for anyone who likes to see musical boundaries smashed! (Note: At the bottom of this post there is an "index" of cover songs that appear in other posts in case you're interested or missed them).

1. "Work for Never" (ENT) by Sanctum from their split LP with Stormcrow
2. "Search and Destroy" (The Stooges) by Terveet Kädet from the "Horse" LP
3. "I Don't Care" (The Big Boys) by 8-Bark from the "How the Midwest Was Won" Comp.
4. "From Enslavement to Obliteration" (Napalm Death) by Capitalist Casualties from their S/T discog. CD
5. "No Truth" (Christ on Parade) by Crossed Out from their discography LP
6. "Selfserve" (Crossed Out) by Denak from their "Grindcore" 10"
7. "Dead Shall Rise" (Terrorizer) by Le Scrawl from their "Too Short to Ignore" LP
8. "Ghetto" (Presley) by Leatherface from their "Cherry Knowle" LP
9. "Mr. Suit" (Wire) by The New Bomb Turks from their "Destroy- Oh-Boy!" LP
10. "Power" (derived from the Union Protest Song Lisa Simpson sings when Homer becomes union president) by Cluster Bomb Unit from the "Less Bank More World" Comp.
11. "Hear Nothing, See Nothing, Say Nothing" (Discharge) by Nausea from their "Punk Terrorist Anthology 1" CD
12. "Children of the Grave" (Black Sabbath) by Detestation from their "Unheard Cries" demo
13. "Am I Demon" (Danzig) by Coliseum from their split LP with The Doomriders
14. "Banned from the Pubs" (Peter and the Test Tube Babies) by Filth from their split LP with Blatz
15. "Savior" (Neon Christ) by Car vs. Driver from their "Out of a Silent Sky" LP
16. "Lack of Intelligence" (Disrupt) by Hatred Surge from their split EP with Insect Warfare
17. "21st Century Schizoid Man" (King Crimson) by Rorschach from the "God's Chosen People" comp.
18. "Taste the Steel" (Beowulf) by Despise You from their "West Side Horizons" CD
19. "Split" (Jawbreaker) by Friction from the "How the Midwest Was Won" comp.
20. "Prejudice" (Crucifix) by Aus Rotten from their "Not One Single Fucking Hit" discography CD
21. "Pink Houses" (John Cougar Mellencamp) by Avail from their "Dixie" LP
22. "Boys Don't Cry" (The Cure) by Sheer Terror from their "Bulldog Edition" 2xCD

great job! I just miss the best cover song in the history of punk! that is PUFF THE MAGIC DRAGON done by FANG in case you don´t know! and before you ask: ja, ich bin wirklich so bescheuert!

Oh yeah, I heard about the split with Drain the Sky and I can't wait. Also, Birushanah are touring Europe in October so I really hope I can catch them somewhere. Incredible band!

Pabst- Thanks. I went ahead and checked out that "Puff" cover. Pretty damned cool!

i have in mind two comp's with Brazilian & Swedish bands in demo recordings but i m too lazy to sit down and work on it...

Loved the first one and now this one too. There's something about cover songs that are done right, meaning not trying to sound just like the original. We call that kareoke. Well done sir and definately thanx for your time and effort. "No Truth" (Christ on Parade) by Crossed Out was my fave.

was that really the final mix-"tape"?
if so, I might shamelessly steal that idea and carry on where you stopped as I think the PUFF gospel should reach the ears of more people than you and me!
well, not really stealing "your" idea as I´m quite sure mixtapes were around before anybody could have even thought of something like a blog!

Yo! Pabst, I hold the rights and monopoly on ... NOTHING! I'm going to do more mixtapes, but maybe not cover songs. I hope you'll do some yourself since you probably have a lot of treasures I don't.

Justin- I'm glad you like the "tapes"! Crossed Out were easily one of the best things San Diego ever belched out. Hardcore karaoke... sounds like a good time... and a good name for the comp (too bad I didn't think of that!)