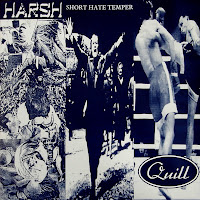 Three pissed-off bands from three continents... global harmony through ultra-violent music! This 3-way (he he) split (TVG Records, 2000?) is a real gem as each band plays its own brand of powerviolence expertly! Short Hate Temper start the show off with their amazingly catchy fastcore- first with a long track (two and half minutes), followed by seven short ragers. Great stuff that rivals their material on the Slight Slappers split. Following SHT, we have a recent Fugitive E. favorite, Harsh. These Finns win me over again, this time with eight bass-obsessed originals and a Nihilistics cover. The recording's a little muffled, but these are the best Harsh tracks posted here yet! The entire second side of this 10" is dedicated to the controlled madness of Japan's Quill. These punks opt for a less dark sound, and crank the punk-rock knob to eleven. On the average, each track is a mere 30 seconds of spazzed-out power chords- 14 originals, 2 audience sound samples (from a kick boxing match?) and an Infest cover. Although I'm pretty sure this record is out of print (the label says it has 10 left, but I think it has been saying that for a while), you can still find it around in various places (these bands are great, but let's face it, they aren't in demand). 1800 copies were pressed on pink wax...

you really did it! congratulations! I gave up after trying for the 2nd time! maybe I was just to lazy! the CHARLES BRONSON / QUILL split 7" is still on my to do list!

It wasn't too tough, just a lot friggin' songs!

As the Pope, you can be as lazy as you want to be! However... I'm looking forward to that Bronson split (hint, hint).

Just discovered your site from the link the Pope gave for this post. So much great stuff here but thank you especially for this one. Your time and energy is appreciated.

Hey Justin. Thanks for the link... your blog rules! The favor has been returned.

man, the HARSH tracks on this are so pissed-off....