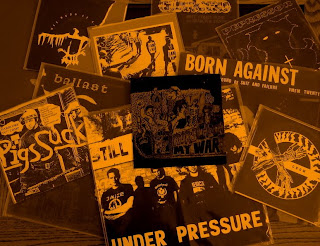 While listening to the new Leatherface Tribute 2xCD comp., I couldn't help but recall all the great cover songs Leatherface and many other favorite bands have produced over the years. I figured, why not do a mixtape with a few of these? Finding no reason not to, I went to work for the past week ripping some of my favorite cover songs from new and old CDs and records (a couple were downloaded). The end-product is the 21 track monster you will hopefully be downloading shortly. Considering the different sources, you can imagine the variation in sound quality. But the quality of the music is undeniable! Many of the tracks are favorite bands covering other favorite bands, but several are songs I only like as they appear here in their more punk interpretations. I can almost guarantee this will make for a most entertaining ride to work tomorrow, or an enlivening soundtrack to your spring-cleaning adventures. I hope you enjoy listening to this half as much as I enjoyed assembling it!
Tracks:
1. "Raise the Curtain" (Jerry's Kids) by His Hero Is Gone from the "Fool's Gold" 7"
2. "Search and Destroy" (The Stooges) by Cursed from the "Hell Comes Home" 7"
3. "Largactyl" (Amebix) by Depressor from the self-titled 7"
4. "No Sanctuary" (Amebix) by Crow from the Prank 7"
5. "My War" (Black Flag) by Rorschach from the split 7" w/ 1.6 Band
6. "Purple Haze" (Jimi Hendrix) by Antischism from the "All Their Money Stinks of Death" 7"
7. "Greedy Bastards" (Antischism) by Capitalist Casualties from the "Pigs Suck" Comp.
8. "Candle in the Wind" (Elton John) by Leatherface from the "Fill Your Boots" Lp
9. "Razor Blades and Aspirin" (Leatherface) by Drunk from the Leatherface Tribute Comp.
10. "The Usurper" (Celtic Frost) by High On Fire from the "Art of Self-Defense" Lp
11. "Clutches" (Nausea) by Kylesa from the "Delusion of Fire" 7"
12. "Time After Time" (Cyndi Lauper) by Action Patrol from "The Weak Force" Lp
13. "Stigmata Martyr" (Bauhaus) by Angel Hair from the Gravity Recs. 12"
14. "Pressure" (Negative Approach) by Union of Uranus from the "Reproach" Comp.
15. "Chory" (Post Regiment) by Ballast from the "Fuse" Lp
16. "Memories of Tomorrow" (Suicidal Tendencies) by Despise You from the "Reality #2" Comp.
17. "Right Brigade" (Bad Brains) by Shank from the split Lp w/ Iron Lung
18. "It's Time" (The Faith) by Under Pressure from the "Still No Future" 12"
19. "Who Are You?" (Void) by Under Pressure from the "Still No Future" 12"
20. "My Rules" (Void) by MK-Ultra from the "Melt" 7"
21. "Movin' On Up" (The Jeffersons TV show theme) by Born Against from "The Rebel Sound of Shit and Failure" collection Lp
Listen

you got that self titled MK-ULTRA 7"? (hint,hint)

you fooled me! the 7" you´re talking about (the one with my rules) is called MELT! the self titled is the 1st 7"!

Oops. Didn't mean to lead you on, Pabst.

This is the first homemade blog comp that I have felt worthy of downloading.
FUCKING AWESOME!!!

i m feeling jealous:i m going to make a comp for Crust-Demos with demo tracks with obscure bands from all over the globe..

7inchcruster- that's a grrrreat idea! A lot of blog visitors "shop the blogs" for stuff they already know about/are looking for. Many don't bother to check out the great bands that never made it "big," so this may be a good way to get their attention. I can't wait!

anyway, I just saw I forgot to tell you that I really like the comp. you made!

Most of the time, I feel the same way, Pope. The hundreds of "blog shoppers" who visit/download but don't say shit can be pretty demoralizing. What I was suggesting is that the demos comp could introduce others to these bands and quite possibly encourage comments and discussion. I know, I live in a dream world...

how about listening to a healthy dose of CRO-MAGS?
...all you hippies better start to face reality... hehehe

sounds like a good cure for living in a dream world