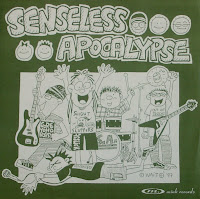 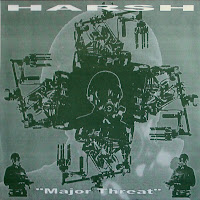 Seeing Japan's Senseless Apocalypse live afforded me the first experience where I thought my head would cave in from sheer volume overload. Luckily, the dizziness did wear off so I could enjoy the rest of their insane set. Even the sound guy (who seemed more like an indie rock dude) was so impressed that he recorded them and played pieces back during the set change (as Capitalist Casualties were preparing to take over!). SA have that effect- they are over the top, but somehow infectious and endearing. Several of the 17 untitled tracks on their split ep with Harsh (Mink Records, 1999), use the bait'n switch technique, luring the listener with rockin' punk rock and metal grooves, but then abruptly opening up a can of Fear of God-style blast-beat ass-whoopin'. This is some entertaining noise, but not as good as their two tracks on the CD posted below. If you still crave more, you can visit Cathedral of Erotic Misery and download their 5" ep or go to SA's myspace to hear tracks from the "Japanese Assault" comp (a more "mature" sound). Or.... if you want punishment of a different sort, Finland's Harsh grace the flip side with their own bass-heavy brand of California-style fastcore. Their admiration for Infest and potential influence from Spazz and Lack of Interest is worn sleeve-side, so if you like that sort of rock, you're in for it! Six tracks that take on dogmatic vegans, MTV "punk", the class gap, and our ever-present need to escape reality.
Download the Split
Posted by Batguano at 4:55 PM

omg dude, i didn't even know this split existed!

i know they have a split with some band called control mechanism, do you have this?

Yes I have witness the sheer madness that is SENSELESS APOCALYPSE live back when they toured the west coast in Dec.97 - early Jan.98 with the CAPITALIST CASUALTIES at 924 Gilman St.,Fuck'n AWESOME!I'm suprised the place was still standing!

Yep, that's when I saw them, but it was in San Diego. I bet the crowd up at Gilman went off!

Matt- You're very welcome! So far, this is the only Harsh record I own and until now I hadn't heard about the Control Mechanism split. I'm working on getting their 3-way split 10" which I'll post later on (if it's out of print).

I have the 3 way split 10" (with shot hate temper and quill) but ripping that one is a pain the ass! good luck doing it!

Thanks for the vote of confidence! After ripping all these comps, though, I know everything about ass-pain! We'll see how it goes...

I figured out the track tag issues and fixed 'em.

Pssst, I got SA's Unpolluted CD. I need an hint.