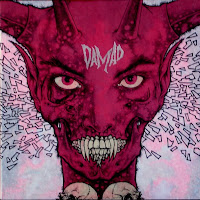 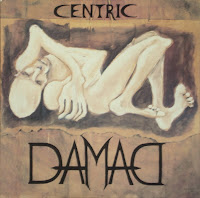 Damad was a band whose appeal, for me at least, took some time to sink in. Their early releases showed intriguing promise, but did not leave a memorable impact (once again, just my opinion). The zine world made a big to-do over "Rise and Fall," but I think I've only listened to that record two or three times. Then, seemingly over night, the band hit their stride and produced some outstanding work, including the "Burning Cold" Lp, the split 10" with Meatjack, and the "Centric" 7". The two eps that comprise today's post are representative of Damad's burgeoning maturity during the late nineties. The "Rewind" ep (Bacteria Sour Records, 1996) consists of two tracks that show the band in full control, but once again I feel the songwriting is lacking the power they would later discover. "Centric," (Clean Plate Records, 1997) however, was the record that convinced me that I needed to follow this band's quest to the next phase. Below the surface of these twisted and dreary dirges, is a punk energy that I didn't feel on their earlier work. The band would keep this torch ablaze until about 2000, when members splintered into Karst and Kylesa. Most of the band's later work is available through Prank Records and At A Loss Recordings.
The eps
Posted by Batguano at 6:31 PM

Yes I agree,I didn't really dig them right off the bat either! I had a few of their records and I didn't really dislike them but I wasn't all crazy about them either.It all changed when I saw them live about four times in the S.F Bay Area.The ferocious vokills unleashed by Victoria were Amazing not to mention how tight the band was at delivering the goods!The shows were always packed and they gave it there all and made me a believer every time. I totally dug the records after witnessing the onslaught they unleash.In fact this is going to make me go on a DAMAD listening spree tomorrow and dig out all there records!

i just want to warn here, these are Prank releases and Ken of Prank is against posting records of his label. just check what happened last summer when i posted His Hero is Gone-The dead of the night...7". this is out of print, (well, i supposed so): i check Prank's webpage, i google 'ed the web and i found no any distro having it, but then this mess happened and i had to remove the download link..

anyway,these are cool records from a great band, i have Rise and fall in 12" and its really great record, to tell the truth, when i buy a Prank record, the only thing i m curious about is not the quality of record but the color of vinyl :)

Hey,
Thanks for looking out! I'm WELL aware of the HHIG 7" "scandal" (great discussion, by the way...). I chose these eps carefully- both are out of print and were NOT released by Prank (at least not originally). I also chose the CAH sampler because it was a free CD released to give CAH bands more exposure (which was my intention, as well). I'm actually kinda paranoid about "stepping on the toes" of record labels.

PS- Most of Prank's releases seem pretty high quality to me!

I'm kinda paranoid too about posting records still in print, i have canceled posts,even if it was an old record, just because i discovered copies in some distro(s), HHIG story was a misunderstand, i sent a mail to
Ken and explained him the whole thing.
i think it was Profane Existence forum where i ve seen this thing about Nick of CAH,i don't think it will be any problem with these ep's, i just wanted to let you know about what happened but this "scandal" seems to be well spread around the blog world :)

huh, a scandal? and I missed it?!? stupid me!
I can understand that Ken doesn´t want his records on p2p progs and/or blogs. I definitly see his point BUT in my case e.g. I buy even more records than before the time I got into blogs as I´d like to have the record if I like a band and mp3s are just a poor substitute compared to vinyl! there are quite a few records I bought AFTER I stumbled over their mp3s on the web.

what Papst said... Ive always bought tons of records... I buy even more now. I just know that what I buy I will love whereas before I spent lots of money on things that werent worth it.

Its a tricky business offering links. Though. I have issues with my own practices on occasion... but I have lots of rationale for it too.

uufff damad is doomed good female brutal voice... hey loko up to El Dopa "the complete recordings" please, ultra good. lack in the blogs... i´m from chile fucking country, in the mortal silence of the south. i need this dope aaarggghhh. good page and bands... bye and expect by you loko...