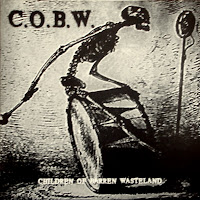 Anyone who has explored this blog far enough knows of my absolute infatuation with the bay area's Zero Hour. This band's discography was the infallible scripture of what came to be labeled "neo-crust." Enough about them... I've already gushed sufficiently in a previous post (the mp3s for which have been re-ripped with slightly cleaner sound quality). The point is that Zero Hour's wraith-like force of a vocalist, Whisper, briefly screamed for Children of Barren Wasteland (COBW), who released only this self-titled 7" (Profane Existence/Skuld Records, 1996). COBW's approach was much more "straight forward," both in the songwriting, and in the vocals which completely avoid the anguished howling and wailing I expected to hear proceed from Whisper's scarified pipes. The songs are catchy and energetic hardcore punk tunes (with a thin layer of crust), and approach nowhere near the abysmal, despair-trolling depths of Zero Hour's inward exploration of the personal hell of human existence (albeit, an exploration with a view toward empowerment). Whisper penned the lyrics as well, which are rambly, but deal thoughtfully with gender roles, the paradox of living as an outsider in a culture of conformity, and the detriment of personal stagnation via fear and complacency. Comparisons aside, this is a solid record that is marred only by the saturation of treble in the recording (you get used to it after the first song).

I remeber seeing this release all over the place when it first came out, but for some reason I never actually tracked it down. Not bad. The production does seem to be a limiting factor though. It almost sounds like the record was being played at the wrong speed, resulting in a rather flat and treble-filled sound. It's kind of hard to get that apacolyptic vibe going on when you sound like a chipmunk.

Damn you! Now every time I think of Whisper I'll imagine a chipmunk with dreadlocks and Antisect patches!