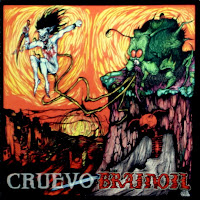 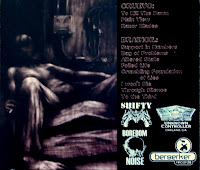 Having been released jointly by four labels (see pic above), you'd assume this disc would be more widely available! Unfortunately for the masses, the Cruevo/Brainoil split CD was only released in a single run of a thousand (in 2001?). That's a real shame, and although other blogs have probably covered this one, I am excited to do my part in spreading the rock! Brainoil was the motivating factor for seeking out this disc, but as you can tell from my enthusiasm, Cruevo (ex-Kalas, High Tone Son of a Bitch, Medication Time...) tears shit up as well. This Oakland five piece plod through three pulsating, sixties/seventies rock influenced sludge ditties (I'm trying to avoid the term stoner-rock... oops), fortified with a thick guitar sound and polished off with some painful, screamed vocals. Tone-wise, the band stays out of the deep canyons of doom that slower bands these days seem to love sinking into, and remain on the "high" ground of good ol' rock'n roll (but heavy!). Other than these three tracks, you may have a hard time finding any sign of life from these rockers in recorded form. Now, on to Brainoil... Anyone who has drunk from the Brainoil chalice (their 12" ep) knows these bottom dwellers must have made a pact with some unsavory and otherworldly entity to have conjured riffs like these! This time around, the production appropriately favors the lower end, loosening and revealing the dirty, diabolical sludginess of the band's true master plan. A couple of the tracks are rough versions of ones you may recognize, but the others are exclusives, comprised of a main-line of intricate Sabbath wizardry, chased with a bit of the blues. When sludge rock is done right, there is reason to rejoice... and rejoice you will! Brainoil members have done time in Grimple, Destroy!, Ojo Rojo, Lana Dagales, and many more, so you know these guys are the hardened real deal!

I had it mind that I would rip this thing at a super huge bit rate, but the tracks kept coming out with hissing and crackling (still not sure why). A couple of years ago I found some good MP3s on Soulseek that are cleaner sounding (but low bit rate), so I'm using those instead...
Download
Posted by Batguano at 4:22 PM

Great release from two gritty-as-fuck Bay Area bands.
This CD has always been a personal favorite of mine...

Same here. Brainoil sound mean as hell on this one!