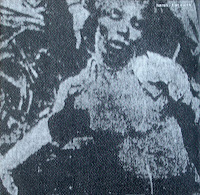 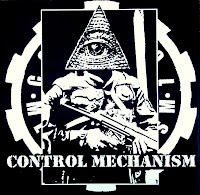 A little while back, commenter, Matt, brought the Harsh/Control Mechanism split 7" (Phobia Records/Impregnate Noise Laboratories, 2002?) to my attention. Shortly afterward, I found it in a distro for 2 (US) dollars (a great deal considering the state of the economy right now!). Since Finland's Harsh rules, I figured I should pick it up... and it's a good thing I did! Both bands call it a draw as they battle to formulate the essence of pure spite, seldom neglecting the power of speed, and drawing influences from all the great names in powerviolence and grindcore. It's tough not to pull out the Man is the Bastard card to describe Harsh on this incarnation, as the band appears here as a two piece (bass/drums) and throws together almost equal parts sludgy despair and lunatic blast-beat fury. Some of the bass grooves are pretty damned catchy and crushing, making Harsh's eight tracks quite the revelation! The void of guitarlessness left by Harsh is filled on side b courtesy of another Finnish band, Control Mechanism. This is the only exposure I've had to this band, and I must say they stand out fairly noticeably from the multitudes of grind/mince acts out there. The eight tracks engraved on their side bring to mind the viciousness of Despise You, with the whacked-out mayhem of Sick Terror and Anal Cunt. There's some sense of variation from track to track due to the very disparate vocal styles of the two singer, and because the songs were gleaned from three different recording sessions. All in all, this a satisfying little rager of an ep! (Note: there's some crackley tape hiss at different points, but I'm fairly sure it's from the recording, not the ripping...)


Listen
Posted by Batguano at 7:16 PM

thanks a lot man for the dedication, you're really awesome.

i dug Harsh, but, man, Control Mechanism is the shit!

don't you have anything else by them?

Matt- No problem! Thanks for the tip about the record.

Anonymous- yeah, Control Mechanism shreds... I'll keep an eye out for more stuff by them.

this is good stuff. i like lyrics too. control mechanism was a one-man project made by drummer of harsh. before this he put out one 7" (as far as i know)in 1997 if memory serves...
roman

Roman- Once again, THANKS for your help/info!

can you please re-up this

Okay, the link should be good now.