No Dogs, No Masters! 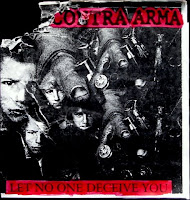 You're probably wondering what the hell happened with the cover photo. No, I did not get hungry... explanation is to follow. Today's spotlight is on the band Arma Contra Arma. When their only record, the "Let No One Deceive You (No Dejes Que Nadie Te Engane)" EP was released (on Lengua Armada Discos), Arma was billed as 'the band with Martin from Los Crudos playing drums.' I suppose that was a "selling point" for many, although his drumming is nothing remarkable. As a whole, the band's attack is not a surprise one for any fan of Crudos. ACA keeps it simple and raw the way Huasipungo or Ataque Frontal used to serve it up. Each of the 7 tracks (except the last one) gets it's message across in under a minute, making this EP a quick, no-bullshit experience!

Cover Story: Sorry about the crappy cover pic. When I adopted my dog nine and half years ago, he went through that orally fixated separation anxiety phase. I thought my records were secure, but I underestimated his tenacious jaws of death. Among the other casualties of this brazen act of vandalism: the .NEMA LP, the Angel Hair/Kerosene 454 split EP, and the HHIG "15 Counts" LP (this one, he actually damaged the wax!). In retrospect, it could've been a lot worse. I think he (Ulysses) fully realized my wrath over this matter, because he never pulled a stunt like that again! (A message to all you dogs out there: Don't mess with your best friend's records!)

The Arma Contra Arma EP
Posted by Batguano at 7:47 PM

Great post and say that without even having listened to the music yet. The story of your destructive dog was great. Isn't it funny how people like us feel about our music collection. My collection has narrowly escaped a flooded basement and a curious grand daughter. Minimal damage in both instances. I look forward to giving this a listen. Thanx

well, I got a cat that is into vandalism ! but he just fucks up dvd covers! don´t know why! though, he likes to nap on my records! he always plays the innocent cat when I don´t catch him red handed but as he´s a persian it´s not so difficult to get him nailed on that!

Yeah, when it comes to the records, I become rather dog-like myself in my territoriality. You can mess with anything of mine, but don't touch the wax!

Wow, a cat with a thing for DVD covers... I haven't heard that one before! But I guess by sleeping on the records he is sure to get some attention from you...

believe me he knows how to draw attention! and you wouldn´t believe how nasty he can get if I dare to ignore him!

ahha, nice story. :)
i got a lot to tell about cats and dogs. about a year ago an Asshole poisoned my three dogs and one of these was mother of a five days old puppy, so i had to be the "mother" of it and i did so. now Vicky (her name) is a one and a half year old beauty.

and about cats.. i always have a big male to protect the others. i have six now and two of them have new born babies.Lionel last week waited until i left, then he entered the kichen and ate the kebab..:/

Man, I'm sorry to hear about your dogs. There are some really sick people out there. It's a good thing your motherly instincts kicked in though! You and the "puppy" must be pretty close.