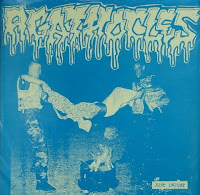 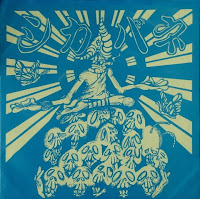 I have some split 7" ragers I've been wanting to rip and get out here for a while. Since many Americans have a three day weekend (I have four!), and the weather sucks, this seemed like the time to do a "Triple Thrash Threat" kind of deal, Fugitive E. style (please don't sue me, MTV)! Today's "program" begins with a Belgium vs. Japan match-up. Most of you know Agathocles, at least by reputation. What reputation would that be...? I guess the band competing with Unholy Grave for the unofficial "Who Can Do the Most Split Records" contest. Here again they pump out three more simple mince tracks that are more compelling and enjoyable than I remember my last AG experience being (which was admittedly a while ago). Good stuff, although they aren't my favorite band in the world.

Shikabane, on the other hand, is a band I always look forward to hearing from. Those who know this band will be a little surprised by their offerings on this one. Missing is the brooding layer of darkness which has become the hallmark of this band. Instead, these tracks resemble the energetic thrash attack of Romantic Gorilla or Quill. I like their newer material better, but it's still nice to see where this band "came from." Note: I don't know how to transcribe Japanese titles. Sorry. If anyone knows a good method to learn this, do share!
Download It
Posted by Batguano at 10:11 AM

i think AG win easily the competition with Unholy Grave:UG are ok, their grindcore rules, people who know them personally say they are cool guys but when the discussion goes to subjects such as death penalty and terrorism their ideas are from what shall we expect to hear from a grinder....

the AG cover is a real photo with two Belgian paramilitaries torturing a kid in some country in Africa, this photo caused a lot of disgust in Belgium.

Hey, thanks for the translations. I had no idea you had posted this already. Two things are clear: post-overlaps are inevitable, and I really need to explore the older posts on your blog!