The "S.S." Must Stand for Super-Shred! 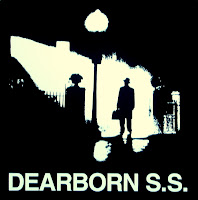 Yeah, it's another left-wing band that punctuates its name with that super ironic "SS." It was probably the unoriginality of the band's name that led me to dismiss them as just a cut-rate, aborted branch-off of .NEMA and Ottawa, and thus ignored their EP for years. BIG mistake in hindsight, as I now find that it's an AWESOME EP (in every sense of that word), and may surpass everything .NEMA or Ottawa put out in both power and quality! Dearborn SS did indeed feature Matt Weeks (of Current, Ottawa, .NEMA, Calvary, Council Records notoriety), and a cast of Michigan-based musicians that may have appeared in some of those bands as well. The sound on these seven tracks is hypothetically akin to what you'd get if you spliced the crisp, hard, fast drumming of Disrupt with the slight dissonance of more "modern" bands like Devoid of Faith. Each track is a whirlwind of energy, and before any of them gets too repetitive, the songwriting provides some turn or other to keep the jam from losing its intense momentum. To round this great little disc out, the male/female trade-off vocals are more compelling than many bands of this ilk (for me, at least), mainly because Kim's vocals are so reminiscent of Pink Turds in Space's and/or Detestation's (always a plus!). This EP is a raging piece of modern quasi-Scandi-thrash that could lead to a wide array of hardcore freaks slamming against walls or running naked in the streets (no guarantees, but I'm fairly confident).

Ultra-Nerdy Info:
The DSS EP was released in a single pressing of 1500 by Council Records and Lengua Armada Discos in 2000. 60 of those pieces were released in a "German only" edition, under the title THE DEARBORNSS, with all references to "S.S." removed (or at least "subtly" integrated). Based on the insert, it seems the band name was inspired by the band's disgust over Henry Ford's collusion with Nazi Germany before and during The War.

didn´t know this band! but they sound great!

S.uper S.hred is right, food for the ears. Thanx for the post sir. You gotta dig that crusty sound with dual male/female vocals. Like the Pope, I've never heard of this band. One of the true benefits of a blog like yours. Thanx again.

never heard these guys (and girl) before.they sound ok,
thanks :)

The link for this doesn't work - it gives me a file that extracts a blank file with no extension. Mind reupping?

this happened to me too. it a mediafire bullshit,i tried a few times and finally i downloaded the file..just try again and again..

Sean- I'll be glad to re-up if it's still giving you problems. Any luck yet?

That sucks about mediafire... Does anyone know a good upload site that works in all regions and countries?

drek kinney of jihad was also in this band