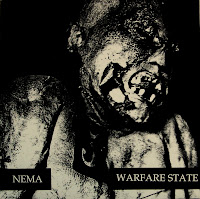 Another somewhat forgotten split, the NEMA/Warfare State ep was released in 1996 jointly by Schwarma and Hardcore Noisies Records (quantity is unknown). Many out there probably know NEMA because of their LP "Bring Our Curses Home," and from their members' previous involvement in Hobbit-grinding outfit, Ottawa (as well as Current). The band offers two great, albeit noisy, thrash/grind conniptions, and one slower, chunky track that completely rules! I kind of wish the production was better, but in a way that would perhaps ruin the overall effect. NEMA were accused of posturing and other counts of pretentiousness, but those tidbits of gossip may have been a result of scene politics or the band being misunderstood. I don't care too much, as their music definitely delivers. NEMA shares the spotlight here with Canadian crust-thrashers, Warfare State, who may not have released anything else prior to break-up. The lack of production really hurts the impact of the band's three tracks, which are an otherwise caustic blend of crossover thrash, d-beat crust, and black metal vocals. Members of Warfare State would go on to form Born Dead Icons and Countdown to Oblivion.

The Split
Posted by Batguano at 9:25 AM

Hey! I stopped by to read your comments on Post Regiment (yes, best band ever, they are currently making me happy at the moment), and saw this... Thanks for digging this record out of the vaults. Funny to think that anybody cares even a little bit about some obscure 7" from the last century that I played guitar on.

There is also a Warfare State demo which has the songs from this 7" plus a few extras. We also recorded a bunch of songs on 4-track which, IMHO, sound a hell of a lot better than this recording, but we didn't really finish the vocals to our liking.

Excellent! Thanks for the info. I was wondering what else you guys had done. Maybe if you get your blog going (nudge, nudge) you might post those WS remnants!?

So, yes, I do care. I've been carting around/listening to some of these "obscurities" for over a decade, and they've kind of become part of my psychic "junk drawer" (treasure drawer really). I post them with the hope that someone will enjoy them the second time around (or that a band member will stop by!)