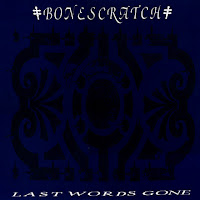 That's right, Bonescratch. Athough based in Sapporo, Japan, you may want to hold back any assumptions about Bonescratch's music. This isn't "Burning Spirits"-style hardcore, or blown-out distorto-Discharge worship. Instead, Bonescratch wear their diploma from the San Diego School of Hardcore on their sleeve (or perhaps it's the Ebullition or Old Glory school?). The good old days come to mind when it seemed that every month some new band would form with ex-members of Heroin, Indian Summer and Native Nod were considered "hardcore bands," and "chaotic" was an essential term used in every music review. Bonescratch released their "Last Words Gone" 12" in 1998 (on Bloodsucker Records), at the tail end of this thriving period of blurred distinctions, providing evidence that the SD sound did in fact land on the other side of the Pacific. Within these grooves, the band stirs up your emotions with the buoyant guitar sound of mid-period Antioch Arrow, the throbbing bass of Angel Hair, and vocals that sound like/are a Japanese guy screaming like Sam McPheeters of late-period Born Against. If this description sounds good to you, you will probably love Bonescratch (as I obviously do). If you don't know what or who the fuck I'm talking about, check out Bonescratch anyway... the worst that can happen is that you'll dismiss them as "interesting" and move on. The band also released a split 7" with In/humanity, but no other records that I'm aware of.

Thanks for the info. I just found out they did a split 7" with Sawpit as well.