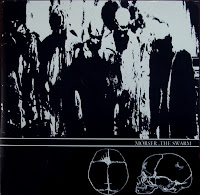 Some records are so singular and arresting in their power, they seem to have their own gravitational pull. The Mörser/The Swarm split 7" is one of these; it lures you in black hole-like, and does things to you scientists only wish they had the words with which to explain the phenomenon. Mörser shouldn't need any introduction, but perhaps do. This German band is Systral's evil twin, and issues forth an a-traditional brand of grindcore that leaves nothing standing in its wake: four "singers," two bass players, two bass drums, and a guitarist. The two tracks included here are no disappointment to anyone who has heard this band before. The Swarm's tracks are miles away from disappointment, as well. Prior to hearing this ep, I had only heard one track by these Canadians on a No Idea comp., which left me numb. However, on this disc the band completely destroys with three tracks of suffocatingly heavy Swedish influenced hardcore that brings to mind the desert-bleakness and urgency of Initial State. This split is no light listening, so I suggest you warm up by listening to any of the bands mentioned already, and maybe a little Nasum and Tragedy.

The Mörser/Swarm split was released around 1999 by Spitfall and Per Koro Records. The Swarm's tracks are available on their CD.

absolute rager! many thanks