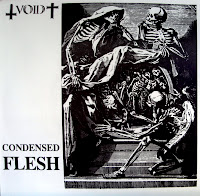 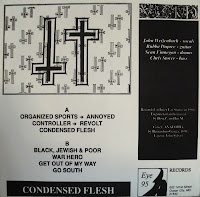 With so many blogs singing the praises of Void, and considering the sad news, I felt the urge to post the "Condensed Flesh" 7". It's probably been done already, but oh well. Many hardcore-types have their story about the first time they heard the Void/Faith split. Mine's no different. I was in high school, and it, as well as the Bad Brains LP, changed my musical life for the next 15 years and beyond. I doubt the members of Void could have fathomed at the time the impact they would continue to have so many years later. They were one of the greatest and most intense bands of this genre, and tore down whatever boundaries their predecessors had built. Thanks for the music, and my condolences to the Finnegan family...


The Record:
I picked up the "Condensed Flesh" 7" in the mid 1990's when Eye 95 Records graciously decided it was time to issue it on vinyl for what I believe to be the first time (whether legitimately or not, I 'm not certain). From what I understand, the nine tracks were recorded as a demo in 1981. The recording is much better than on their split LP tracks, but the vocals are not nearly as over-the-top. Regardless, it's a great EP and several of the tracks do not appear on the split. If for whatever reason you haven't heard the Faith split- listen to that first, then this EP, then go over to Lo-Res Viscera and check out the unreleased LP (don't forget to leave him comment!).