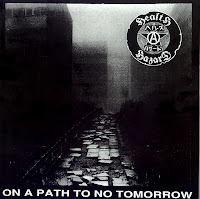 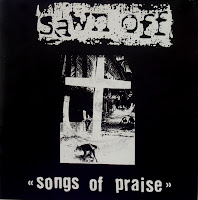 Since we're on the topic of ultra-raging splits, we can't ignore this noisy specimen released by two bands with long histories (or would go on to create long histories. Futures?...) Health Hazard took England and the world by storm with their 7" and 10", and finished their reign with this split 7". On this release, the recording on the guitars seems cleaner than on previous outings (definitely less bass dominance than on the 10"), and it appears that the band was really coming into its own musicianship-wise (just in time to call it quits). These are perhaps HH's best written songs, although their entire discography is awesome. Their sound can be perhaps described as the intersection between ENT and Ripcord/Heresy, with the vocals of Pink Turds in Space (but not really). The first track supplies some unexpected levity in the form of a "Funky Town" cover, and the track "Just for Now" was later re-recorded with different lyrics by Suffer (the band three of the members would form in HH's wake), for the "Complacency" compilation (post on this disc soon). On the other side, Sawn Off make/made what I believe was their debut. They are a perfect match for Health Hazard, as they played a similar raucous style of fastcore/hardcore, but with atrocious distortion and production. Their lyrics deal with the usual hardcore fare, but with a healthy serving of snideness (e.g. observe the title of their side and the image of a dog taking a big leak on a big cross). Members of Sawn Off went on to play in Boxed In, Shank, Endless Blockade, Afterbirth and other bands, all of whom are great. Somewhere out there, you may be able to find Health Hazard's discography CD from Prank Records (also serves as a Suffer discography), but I'm not sure about the availability of Sawn Off's material.
The Split

sawn off did release a discography cd/lp on flath earth records in 2002 i think; this material is also available there. this compilation itself is short, but very good.

sawn off did release a discography cd/lp on flath earth records in 2002 i think; this material is also available there. this compilation itself is short, but very good.