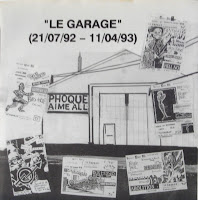 To complete the trinity of 7" compilations, I offer "Le Garage." I am not posting this EP because it has the best recordings of the best hardcore bands that ever graced a stage. "Le Garage" is, rather, a piece of history documenting, celebrating, and mourning the beginnings of a "scene" and the demise of the venue which provided its germination. Some of the bands' names would come to epitomize the European hardcore of the '90's, but others fizzled out (or I just never followed their path). I was/am most interested here with Ivich and Finger Print. These two bands, for me at least, were the Pepsi and Coke (pardon the trite corporate comparison) of French hardcore. Both released excellent catalogues of music and undoubtedly influenced the current wave of French screamy hardcore (Amanda Woodward, Sed Non Satiata, etc.). The tracks each band supplied here represent their earliest, rawest incarnations. In fact, the Finger Print track contains no hint of their signature metallic yet emotive style, and the vocals go no where near fever pitch of Nicolas's later black metal-esque screeches. The band was apparently still searching for their sound, which may account for why this song never made it to their discography CD (which you can download here). A couple of the other, lesser known bands (Human Alert & Abolition) contributed great tracks, making this comp. both a curiosity and a great listen.

Hi
Eh eh, Le garage was an old garage from the 50s in st Jean de la Ruelle near Orleans (France). It was one of the great thing happen in France in the beginning of the 90s. The Phoque Aime All association (aka : Fuck em all) booked lot of shows of new hc/punk generation bands. The garage was destroyed and let the place for a beautiful highway. Cool spirit: diy, friendly, anarchist, not expensive, etc...a really hc place. I remember lot of really good shows here: the new french scene: autonomia indigena, ivich, shatter the myth, fingerprint, condense, some goods eurohc bands like decline, one by one, health hazard, sedition, abolition, age human alert, hammerhead (ger.), some us like hell no, christ on a crutch, downcast (w/kent), etc....so much to say. so....Good moments. Thanks Le Garage..like Michel write: now the garage lives in paradise....

Sounds like an incredible place! Thanks for sharing the info and memories. I was too far away ever to have visited Le Garage, but it seems like it was great. Everyone's punk rock memories have a home is some old venue...