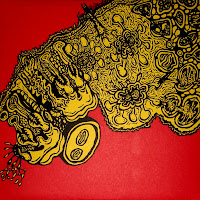 Gob's "Kill Yourself Commandment" LP (Satan's Pimp Records, 2000) carved out a niche big enough only for itself. Whatever label you try to slap on this band or record it is doomed to insufficiency, even though elements of noise rock, "Gravity Records" style hardcore, sludge, and grindcore rise to the surface in any given song. Gob's guitar sound is a twisted, drearisome, offensive hand gesture to all musical sensibility. However, in Jon Kortland's capable hands the murky discord lends concreteness to the sardonic spite that is Gob's gospel. The spontaneity of the rhythm section lightens the oppressiveness of the guitars by pulling the sludgier riffs out of their mire and into more chaotic, syncopated territory, incorporating jarring starts and stops, and integrating blast beats into the slower parts in ways I haven't heard elsewhere. Whether you end up loving or hating this band, you have to raise your glass to their uniqueness.

Members of Gob were/are in The Vae Victis (I believe) and Iron Lung (probably some other bands, as well). The only other Gob releases I recall are their split EP's with Spazz and Wink Martindale, although I have a feeling they released several others (leave a comment if you have more info!). There is also another band from Canada (pop punk?) of the same name, but there's no way you could possibly confuse the two.

The mighty GOB also did a split 7" with Agoraphobic Nosebleed on a french label called "Bad Card" and a single sided 7" with one song called "Adonis" on Satans Pimp Rec. They also had tracks on a series of 7" eps titled "accidental death through misadventure & mayhem"vol.2,"accidental decapitation through masturbation"vol.3 and "accidental double homicide"vol.4 2x7" all on Satans Pimp Rec. Killer ep comps! I don't know if vol.1 or if a vol.5 ever came out but I would like to know. I have no way of ripping these awesome records for posting as of yet, sorry!Cheers

Finally! Thanks! I really appreciate the info. I'll keep an eye out for these recs. now.

No problem thanks for the great blog! I forgot to mention that only 200 were pressed of the 1 sided ep with the song "adonis".The copy I bought from the band is #181 so says the sleeve.I saw them live 4 times and they were Badass!