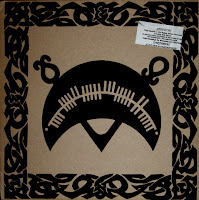 By request, here is Sedition's opus, "Earthbeat" (1993). As mentioned in a long-ago post, Sedition was a political hardcore band from Scotland influenced thematically by an atavistic tribalism. Musically their influences stemmed from other UK political hardcore, a little '80's crossover, and, on this record at least, a bit of the emotive modern hardcore contemporaneously spreading across the globe. There are no throw-aways on this rager, and as lead-ins to most tracks the listener is treated to some stimulating sound samples taken from documentary films on various tribal societies (mainly from North America and Ireland/Scotland). Sedition's socio-political vision may deter some, but their musical power and rhetorical sincerity render those hang-ups superfluous.

According to Flat Earth Records, 3500 copies were pressed and sold (1000 of which came in Hessian sacks). The tracks were collected on Sedition's discography CD, "End in the Beginning... Beginning in the End," but good luck trying to find anything of theirs at a reasonable/sane price.

"Earthbeat"
Posted by Batguano at 5:49 PM

Your posts have been consistently fucking kick fucking ass - thanks for all the great stuff...

The pleasure's all mine. No thanks are necessary since I've downloaded a shit-ton of great stuff from your site too!

I've never seen a blog with so much hippie shit.