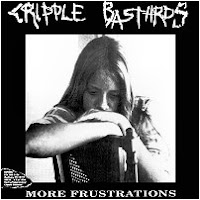 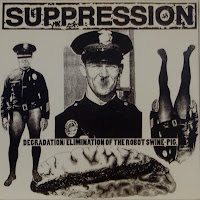 As '90's artifact number 1 billion, I present to you this split LP (Bovine Records, 1997) between Italian grindcore stalwarts, Cripple Bastards, and Virginian noise-violence misanthropes, Suppression. Unless you've been living in a cave lined with grindcore-free insulation, you know Cripple Bastards. For information about them, including lyrics, visit their excellent website. The 23 tracks they provide on this LP were supposedly some prime cuts from their "Your Lies In Check" album but with rougher production (which the band felt was more appropriate for their sound). "YLIC" is still available, but these versions are long out of print. CB's split-mates, Suppression, rival them with a sound that has been rightfully described as the illegitimate child of Crossed Out and Man Is The Bastard. The songs are simple, but formidable as fuck, alternating between slow, crushing, repetitive parts that are bursting at the seams with distortion and feedback, and ultra-brutal blast-beat stints matched in intensity only by the previously mentioned bands and perhaps Hatred Surge. These tracks are also included in Suppression's partial discography "9296" if you like what you hear and want more. I might be posting their 7" with Despise You next, but in the meantime: put your hand on the volume knob and prepare some ointment for your new asshole.
Cripple Bastards/Suppression LP