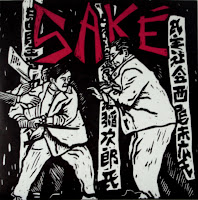 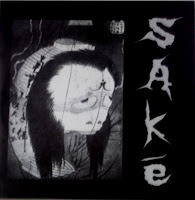 Often credited as the first hardcore band to include a violinist (I'm not sure that's true), Saké contributed a small but interesting body of work to the stellar Northern California punk cannon. As far as I know, their "Piñata" 10" (1996?) and unnamed 7" (1997, both released by Hopscotch Records) were their only releases. Based in Eureka, California, Saké seemed to draw as much influence from the great Bay Area hardcore bands of the early '90's, as from the progressive metal pioneers (Neurosis, Logical Nonsense) of the time. The hardcore influence rears its head on a few tracks where the band kicks up its pace, and certainly in the vocals, which consist of both male and female yellers and screamers (at least when the violinist isn't playing her parts). Lyrically, the band stays within the righteous framework of their time and place, spouting off against gender injustice, backstabbers, and the spiritual and environmental price of progress. The general pace, however, betrays the more sludgy, metal influence, as do the meandering, unpredictable song structures which, by punk standards, enter into almost epic territory. In better moments, the songwriting is powerful, with some driving riffs, and even a little groove here and there, but at other times it drags on (but very seldom). In the case of Saké, I would say that the violin indeed adds to their sound (i.e. it isn't thrown in just to be different). Said violin is used both as a great device for moody intros, as well as a melodic component to the actual songwriting (in both fast and slow sections). On one track ("The Desert"), the melody transforms from an almost middle eastern sound, to a more American or Irish folk one. Very interesting stuff indeed.
Play it Loud!:

Split LP with Submission Hold
Posted by Batguano at 4:38 PM

I was about to post the 10" but you beat me to it, and with the 7" (which I don't have) to boot. Ruling!!! They were a great band and some members went on to form The Hitch. Thanks for posting these, and thanks for the link to my blog.

Yo! It seems great minds do think alike! Sorry to steal you thunder (ha!) and thanks for lettin' me know about The Hitch... I'll have to check into them. Your blog is kicking much ass!! I've almost read all the posts... but it's hard to keep up with your superhuman pace!

I put these guys and girl up at my house back in the 90's in Oklahoma. They played a great show with my grind band Subsanity and some local punk bands,but the day after we had a wild freestyle jam in my garage,running the violin thru the death metal amplifiers was amazing!!Mike/Subsanity subsanity666@yahoo.com

Nice! Wish I could've been there... too bad no one recorded!

Dude, how do you get the accent over the "e" on the keyboard, sorry for my ignorance. When you do a search for Sake, it comes up nothing here, I'm assuming because it has no accent. Great post here from a great band. As you already know mr. Guano, but maybe others don't the Hitch and several links can be found here, http://mustard-relics.com/2008/06/21/the-hitch-2001-cdr/ . Thanx sir.

just to let you know. sake did the Unnatural Disasters split LP w/ submission hold also. but that is the only other i know of.

Holy shit! Thanks. I can't believe I'm only now hearing of this split. My eyes are peeled! Thanks again...

if you find a link befor me let us all know. if i find first i will do same. my dog eat up my copie. thanks. glad to let you know.

I hadn't listened to this band for a really long time.I used to own the Pinata e.p. I remember liking them, but never really getting crazy fanatic about them. I put on the first track from the 10", and immediately realized I am a fucking idiot for not giving them more credit. The 7" is fairly mediocre, but the 10" blows the shit out of my ass and through the floor, where my downstairs neighbors shape it into an altar, and worship it by the moonlight.Strange sounds come from below me as I write this, sounds of violins, weaving around a dense fog of anguish and frustration. Cthulhu, Shug Niggoroth!! Ayyeeeeee!

That's quite a turn-around! I'm glad the band has finally done that to your bowels. Your neighbors should thank you for this incredible gift!

hey cool! i did the artwork on that sake 7". fun to see it again. there is one other sake record i have... it's a split lp with submission hold. good stuff.
~jeff o' the hitch

Hey Jeff, good of you to come by and comment. I was eventually let in on the split LP and posted some rips. Love everything the band did!

Hey Insaniac. Sorry for the delay. The links are refreshed and ready if you still need some Saké.

Can you re-upload Sake discography in FLAC?