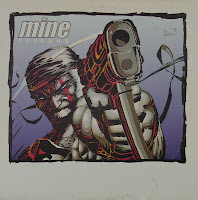 Chocolate, clocks, cheese, neutrality, Fear of God, and Mine. This list represents my knowledge of Switzerland, superficial as it may be. This post deals with last in the list, a brutallic hardcore band of, you guessed it, the mid 1990's. Mine shared many things in common with other European contemporaries: the ferocity and metallic guitar sound of Luzifers Mob and Wounded Knee, along with the emotive qualities of Ego Trip and Dawnbreed. Although Mine released a 7" and at least one compilation track (all of which I have somewhere), their LP is by far their greatest achievement, and one of the high-water marks of the hardcore coming out of The Continent at the time. Much of the album consists of fast-as-hell drumming and catchy metallic riffs, but throughout there is a more than fair amount of slightly chunky/moshy parts, slow heavy intros, and even a little d-beat. The only thing missing is melody, but I don't think anyone will really miss it on this record. It would seem that these guys listened to a lot of Citizens Arrest before writing their songs, and even if that's false, the comparison is still valid. The overall sound is thick and intimidating, and anyone into any kind of good hardcore should give this disk a shot.

"Tetanus" was originally released collaboratively between Common Cause Records (Germany) and The Great American Steak Religion (Canada), which was Yannick's (of Union of Uranus, etc.) label at the time. As an overlooked release, it may still be possible to find it in used bins for mere pocket change. Here are my rips-- sorry if the quality sucks.

Mine "Tetanus" and split with Dawnbreed

who does the vocals on that record?

The line up is Micha, Ricki, Simon, and Christian... instruments are not specified.

I am Christian from MINE. Thank you for the post. :-)

Here's a better rip that I just did: http://anonym.to/?http://www.megaupload.com/?d=IDCU4NX3

Hi Christian... Thank you so much! I was thinking about re-ripping this, but you beat me to it! I love this LP... so heavy and powerful! Thanks again... you rule!!!

You are welcome. Here's the complete discography:

Compilation tracks on PLOT Magazine LP and both compilations on JTTP.

You are welcome. Here's the complete discography:

Compilation tracks on PLOT Magazine LP and both compilations on JTTP.

hello!
please, could you re-upload that MINE "tetanus" LP again? (if it's possible, the best rip).
Thanks a lot!!

and if you also have the MINE "in vacuo" (final) 7" and you can also re-upload it i would be really pleased!!
thanks again for your blog!!

Sorry, but right now I don't have that 7". I will hunt it down soon. For now, the link is refreshed and I added the split 7" with Dawnbreed. Thanks!

Hey, I went ahead and ripped the 7". It has it's own link. If you need pics of the insert, let me know.

amazing guy!! thanks so much!! i can get the covers from discogs. thanks a lot!!
i guess you haven't got the 'in vacuo' 7'' yet, right?
thanks again and take care and all the best for all those amazing records you post!

No, I totally forgot to search for it! I will get it ASAP!