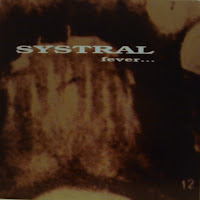 I hope you'll humor my obsession with 1990's bands; that decade held most of my musically formative years, and I haven't exhausted the archives yet! Today's reason to gush is a 13 track 10" of hybridized grind from Germany's Systral. Recorded in 1995, "Fever" (Per Koro Records) skillfully fused many of grindcore's basic elements (blast beats, low end guitars, growled/screamed vocals) with the tropes prevalent in the burgeoning "modern" US hardcore "scene" of the time (frenetic bursts of energy and dissonant guitar meanderings most associated with bands like Merel, Heroin, and Union of Uranus). Systral managed to distill the essence of pure bleakness between their fairly sparse blast beat runs by slowing things way down, tuning their guitars way low, and cranking the distortion and volume way up. The resulting guitar sound, coupled with the creepingly slow tempos, cast a foreboding ambience central to this record's uniqueness and power.

Systral's catalog consists of this 10", a 7", a split 7" with Acheborn, some compilation tracks, and the "Black Smoker" LP, which was perhaps a precursor to the "Death n' Roll" subgenre that's all the rage with the kids today, but which was marred by the snide use of a canned audience track throughout the album. It's a good record, but it still does not come close to the EP posted below. Members' involvement in bands like Acme and Morser have brought attention to Systral, but only peripherally it seems. The lack of international availability of their early releases has only helped to enshroud their name further in obscurity (at least outside of Germany). But, alas, pioneering bands will never be truly forgotten, and the cult of Systral is thriving out there in the shadowy crawlspaces and damp basements of hardcore history.

Yeah, I love everything these guys did - no matter what band it was at the time.

This core of musicians is fan-fucking-tastic! I think/hope Morser is still around...