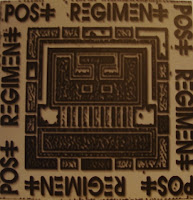 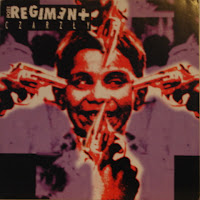 Doing a post on Post Regiment here may be like preaching to the choir, but I can't help but fear the possibility that someone out there has yet to be anointed...

Post Regiment was perhaps the greatest punk/hardcore band to ever come out of Poland (yes, I said it... and yes my exposure to Polish bands is a admittedly limited), and one of the best ever world wide (I'm not retracting that either!). When I listen to either of the LPs depicted above, I often wonder if I need to listen to any other punk records ever again. Granted, that thought disappears when the music stops playing, but at the time it is truly genuine. PR fills me with such fist-pumping euphoria, I often lose my faculties. Their ability to do this lies in the almost-perfection of their all-encompassing sound, replete and often oozing with sincerity, energy, speed, controlled melody/catchiness, diverse song writing, quirky, slightly distorted guitars, pounding bass, righteous lyrics, and the most awesome sounding vocalist any hardcore band could want! Further descriptions will only cheapen PR's greatness, so I will stop here.

For a fairly complete and succinct history of the band, go here. PR has another LP where they collaborated with members of Tragiedia and covered that band's songs. This album ("Tragiedia wg Post Regiment"), as well as their recently released demos LP ("Death Before Metal") is widely available and highly recommended. Members are thankfully still gracing us with their talents in such bands as PESD (the guitarist) and EL Banda (the bassist), and their influence is everywhere (most notably: check out the recent album by Antidotum). Finding Post Regiment's first two albums anywhere outside of Poland, on any format other than cassette is a real B-word. If any band members or labels have issues with me posting these tracks, let me know and I'll take care of it.

Kneel down, and humble yourself! (or don't...):
"Czarzly" (PR's best album! I added an LP only version of "Aniol")
"Post Regiment" (PR's first and almost best album! Contains some non-LP tracks)
Please try to support this band and its representing labels because they deserve it:
Nikt Nic Nie Wie
Profane Existence
Tujaca Fala
Posted by Batguano at 9:20 AM

Nice post ... regarding availability of their releases, NNNW has all their stuff on CD it seems.

You may be interested in this live set from 1997.

It is seldom that I see any Post Reg. stuff for sale in an American distro, which is unfortunate. Anyway, thanks for the link... All links to more PR tracks are much appreciated!