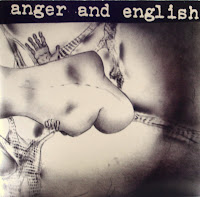 Hardcore was at a crossroads in 1993... Bands were either going metal, or more in the direction of that sentimental three letter word that will not be written here. Still others merged with the whole crust sub-genre. But what of the bands that seemed to refuse our perverse need to label, and which made their mark with their own singularity? I'm thinking, of course, about acts like Born Against, Rorschach, Econochrist, and the lesser known bands who branded their logos and ethos in the psyches of hardcore's dispossessed and jaded. One vestige of this bygone moment is the "Anger and English" 2x7" compilation released on Framework Records (1994?). This comp. showcased 14 inches of label-defying hardcore from bands ranging from ultra obscure (Factory) to legendary (Man Is The Bastard). Considering that there are only four bands featured, "A&E" does wonders in capturing both the creativity and the transience of its unique moment.

Synopsis:
Side One: Campaign. This was Chris Jensen's band before Halfman. I was an early admirer of Chris's by virtue of his being in 2 great bands and also being a teacher (at the time I was studying for this same profession). Campaign's sound borrowed from east coast hardcore and maybe a little grindcore, but the product is Campaign's very own. The pummeling rhythm section, protean tempos, clean guitars, and raspy punk vocals were a combination that screamed originality, yet the finished product was warm and strangely recognizable. The two tracks here are among Campaign's best.

Side Two: Factory. Beyond their 3 songs on "A&E," I know of zero evidence of Factory's existence. Their sound is burly most of the time, and I enjoy their songs until I start following their lyrics. The words in this case, ruin it.

Side Three: Man Is The Bastard. Band history is redundant. This is the band that somehow was alternately categorized as powerviolence and sludge. Their elusiveness is perfect for this comp. They were legendary, for me, because of their live fury; no recording will ever replace the way I felt during and shortly after their live sets. But these tracks are certainly among their most listenable and enjoyable. The recording isn't as heavy as usual, making the jazzy aspects of their music seem more pronounced. And zero in on Connell's drumming... he is in RARE form!

Side Four: Scapegrace. I would love to see this band get more recognition. Scapegrace is a great example of the myriad bands whose disappearance was as quick and thorough as was their career and the amount of ass they kicked. Having left behind only ep's and comp. tracks, they were doomed to obscurity. Scapegrace's talent and originality are nowhere more evident than on these "A&E" tracks. Some have noted the dissonance in the guitars being similar to later Born Against, and others have compared the vocals to Roger Miret's on "Liberty and Justice for..." Whatever the comparisons, Scapegrace were the only ones doing what they were doing, and they did it really fucking well.

Buy the last stragglers:
US
Europe
Posted by Batguano at 4:29 PM