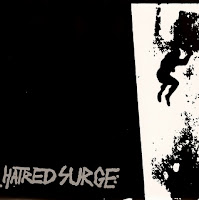 When a band names itself after a Napalm Death demo, you know you're in for a treat, and a little tinnitus. Hatred Surge is Alex Hughes, formerly of Insect Warfare. The nine tracks of pure aural hatred found on their/his vinyl debut EP (2005) are met with much pleasure by this reviewer. The songs are, of course, ridiculously fast (for the most part), and range from 30 seconds to two minutes in length. Precision is certainly not lacking, however there is enough of a chaotic feel to the recording to capture the genuine sense of rage which is mandatory for a powerviolence/grindcore record. Behind each rager is the expected laconic, misanthropic rant calling for the violent dispatching of our "elected" leaders, technocrats, Christians, and all other embarrassments to our species. All the best aspects Infest, Despise You, Iron Lung, and Crossed Out blend into the unholy miasma that is Hatred Surge. Long after the heyday of powerviolence, we may now be witnessing the arrival of one of the best bands in the genre, ever!

I can understand why labels are doing smaller pressings nowadays, but some records should NEVER go out of print! 625 Thrashcore Records has seen this EP fit for obsolescence. Until this changes, all the MP3s are available below. Hatred Surge has also released a split EP with Insect Warfare (OOP), and a split LP with The Endless Blockade. There are some exciting projects in the works, (including a split with Iron Lung) so keep your eyes peeled.

stopped molesting the despise you records after this fucken brutality :P
cheers.

the links are dead. please repost. thanks!

The links are all better now!

I've been informed by a VERY reliable source that Alex was not a member of Despise You. The influence, though, is hard to ignore!

is hatred surge a one-man band?

Yes, but he has gathered musicians in the past and toured with them as Hatred Surge.

thanks for the information. im currently living under a rock right now(hehehe) and not very familiar with who's who in power violence.

hatred surge is great. i could listen to horrible mess all day long!

thanks again for posting!