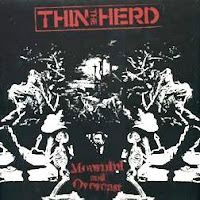 Chicago seems like a sleeping beast when it comes to good crusty hardcore... and it has awakened under the name Thin The Herd! Wrench in the Gears Records put out Thin The Herd's debut LP "Mournful and Overcast" about a year ago, and I don't believe it has received the attention it deserves. These guys bring the noise the way I like it: crushing and frantic drumming, heavy and dark rhythm guitar, and lead guitars that stagger the line between chaos and melody. Imagine the unrestrained ferocity of Hail of Rage's throaty vocals and steamroller crust rhythms, coupled with Kakistocracy's dissonance and urgency. This is one powerful record brought to you by potentially one of the best US crustcore bands around.

Thin The Herd is indeed still around, but it seems the members are focusing on their other (metal) band, Black September, quite a bit more at present. Perhaps with some encouragement, they'll at least leave us another great album before ceasing operations.

Supplies:
Crimes Against Humanity
Young, Angry, and Poor
Posted by Batguano at 7:37 PM