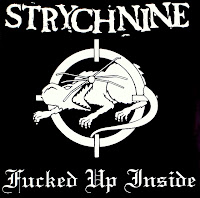 Among the sweet and pristine breezes of Bay Area pop punk, Strychnine was a lung-full of hot, dirty, urban stench. Over the years, the band would gather its soldiers from such great Nor-Cal outfits as Crimpshrine, Econochrist, Capitol Punishment, Filth, etc. Armed with a love of Poison Idea, a love/hate for alcohol, and a bitterness brought on by the years, Strychnine has been sickening thousands for over a decade with their poisonous spew of burly rock-infused hardcore and chant-along choruses. The band's two earliest releases are long out of print, including this great "Fucked Up Inside" 7," released by Reform Records (Denver) around early 1996. Here you'll get 4 doses of the hardcore described above, but with some Crimpshrine-esque bass work, and a cover of Poison Idea's "A.A." If I get motivated enough, I'll post the "Dead Rats and Oakland Dogs" LP later this coming week.

Check it out here

they were a great liveband! I saw them in over here something like 10 years ago and they rocked!

For some reason I never saw them play (even though I live in the same state). I figured they put on a great show!

I don't know these guys personally, so I can't say much in response to that, Anonymous.

It seems weird though, for a band to be "fashion punks" for 10+ years and play the music Strychnine play. I mean, it never seemed that they were trying to be the next MTV band or anything...