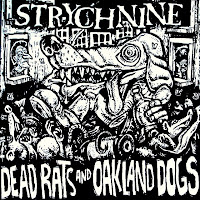 The last post was an appetizer while I got this 17 track feast ripped. On "Dead Rats and Oakland Dogs," the motliest of East Bay crews, Strychnine, serve up all the tracks from the "Fucked Up Inside" EP (minus the Poison Idea cover) in re-recorded form, plus 13 more high gravity, rocked-out detonations. The production does wonders for the band's thick and gritty attack, as does the fact that these tracks were ripped from a pretty well-preserved piece of wax. Many of the masters recorded for East Bay Menace Records were tossed in the garbage (from what I've heard), so it's possible that this LP won't be released again (but stranger things have happened...) 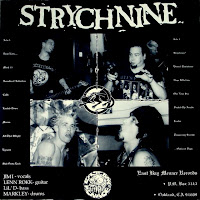