No Sanctuary, and No Sanctum Either? 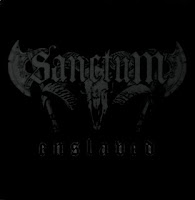 I thought I heard/read somewhere that Sanctum were breaking up. I hope that's not true, because they have been a powerful entity in the Pacific Northwest crust revival. The band plays/played dreary and brutal crust-metal not unlike Deviated Instinct engaging in D & D battle with Bolt Thrower. This 7" (2005) is the self-released press of their first record, "Enslaved" (another batch of 500 was repressed with different cover art). Aside from some recording flaws (I'd like to hear more vocals...), this is a solid debut from a formidable band. For more listening agony, track down Sanctum's other EP, split LP with Stormcrow, and recently released LP, "On The Horizon."

Hey man, glad you like the DA stuff. Thanks a lot for the Def Master 7" and all those 7" comps!
I actually heard that Stormcrow split up as well, but I think neither band actually did haha. Probably just stupid rumors.

Sanctum definitely broke up, my sister was housemates with their singer Kevin. They broke up while they were out on tour. Too bad, they were a great band!

I completely agree, they were a great band! Although the news of their demise is a bummer, thanks for confirming it.

Well, that sucks. I hoped that it was just a rumor.