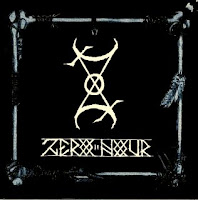 I'm sure this EP has been covered by many blogs, but I don't care! This may be my favorite 7" of all time, and I have been looking forward to sharing it. Zero Hour was a very short lived, enigmatic, and powerful hardcore band from the bay area. Their sound was eerily dark, emotive, and unique, but they must, by default, be grouped as a "crust" band because of the aesthetic of their cover art and the overall tenor of their music. I have no problem with the crust label really, but any label may serve to undermine the force that was Zero Hour. In 1994, when this record was released, there wasn't quite anything like it, and I'm not sure there has been since. I found this in my mailbox at about 2am one morning in 1995, and gave it its first listen. Later in the morning I had to play it again to make sure it was as amazing as I remembered from my "other" state of mind. It was, and I think I have played this thing every month at least since that day.


Descriptions will inevitably fall short. The aforementioned dark, chilling effect of Zero Hour's music can mainly be attributed to the guitar sound. The distortion and tuning remind me of Econochrist's (no crazy bass lines, though), as do the tempo shifts which range from "punk rock" to all out hardcore. Many have noticed some metal influence involved, but I think those claims are exaggerated due their being few preexisting punk bands quite this dark and heavy, other than those with an obvious metal edge (ie. Amebix, Deviated Instinct, etc.). The driving, often heavy, oddly tuned chords are intermittently overlaid with twisted, eerie picking parts that are not melodic, but add to the distinctness of each song, as well as that of the band's overall sound. And, you can't ignore those vocals! They are credited to a woman named "Whisper," and, man, do her vocals render her name ultra-ironic! Her voice wails each word on the verge of breaking into a scream, and, when she can't hold back any longer, she lets that banshee's cry loose! There's so much urgency in each wail and scream, that you can't help but feel the sincerity of her every word. Zero Hour's words deal with the way our diseased culture effects the individual, including war, mind control, and conformity, as well as the difficulty in reviving the essence of what it is/was to be human in the face of all this social pestilence. At times, Whisper will just talk/shout her rhetoric, which is downright preachy, but for some reason it's more than tolerable when she does it.


Spiral Records kept this 7" in print for some time, but it inevitably fell victim to obscurity. Zero Hour went on in 1995 to release a split LP with Apeface on Stinky Feet Records, which sold out quickly and remained out of print for many years. Their songs on that record were notoriously "not as good" as those on the 7". But it's still Zero Hour, and the songs are still great. Vinehell Records recently obtained the remaining record sleeves from the original label, and re-pressed the vinyl for this limited number of sleeves. They may still have some in stock.


The only band member whose activities I am familiar with is the drummer, Markley. He is the same Markley who played drums for Econochrist and Strychnine (quite a career!). The others perhaps dissolved into "musical obscurity" like their band. Zero Hour may have only released 9 songs, but they certainly showed us all what "crust punk" could be. For years now, and perhaps for years to come, they have been and will be the measure by which I evaluate all contributions to this genre.


mp3s (The back cover of the EP encourages free copying of these songs and , since I believe it's out of print, here you go:

If you love Zero Hour, maybe you should check out another bay area band called Multi-Facet. It features the Ojorojo female singer and is one of my all-time favorite band from the 90's together with Zero Hour, Unhinged, Econochrist, Ojorojo... They have one 7", one split 7" and a couple of songs on the East Bay Menace comp. LP

Thanks for reminding me about MF. I have their 7", but I haven't listened to it for years. I will have to resurect it pronto!

thanks! do you have the APE FACE split????

Hey no problem. The Zero Hour tracks from the split are in the folder. I will hopefully do an Apeface post soon with their tracks and the Lemming split as well.

steven, the guitarist from zero hour, played in blood and time with scott kelly from neurosis. they released one album that i know of in 2005 or 2006 on neurot recordings. i don't know if they are still together.

correction: i don't think steven from zero hour actually played on the blood and time album. but i know he was playing with them for awhile, prior to the release. sorry for the misinformation.

could you repost this album the link is dead.

Thanks for letting me know. Check in later this weekend-- I'm planning to re-rip all of the band's stuff @320.

Stumbled on this page yesterday... I'll respect their privacy enough, but I'll simply say that their bassist/2nd vocalist Ryan (my brother) is busy with LAM (life after music!) and is doing very well. I'll point him towards this thread - I'm sure your words mean a lot to him!

Cool, yeah, thanks for taking the time to do that and thank Steven for the years of listening joy and torment!

Thanks for the nice words! Zero Hour was a great and fun band to be in. Was trying to get Prank! Records to rerelease all the songs on a cd. I still have the dats if someone wants to take it on. Currently I'm in Awesome, Fracas, the Twots, the Criminals and and all zombie dead boys cover act called the Undead Boys! Yeah, I've been busy! Cheers!

Hey Markley,
Thanks for taking the time to come by and say a few words. I'm a huge fan of all your projects so far, so I'm happy to hear you're so busy. I had heard rumor of the Zero Hour discography, and for the sake of the band's legacy, I hope it eventually happens. Take it easy, and best of luck with everything!

Rad! I just posted some live Multi-Facet from 1994-1995 on my blog. Go check it out if you like Zero-Hour: http://theusedneedle.blogspot.com/
Thanks for sharing. I lost my rip of the ZH/AF split and this makes part of recovery much easier than re-ripping. :)

love to have this again please re up

I took over the inventory for Spiral Records recently and I have a few copies still available, I may have to plate for the 7" and lots of the record covers as well.