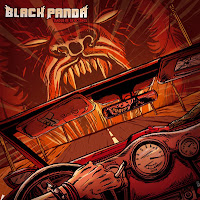 Spanish society must be either in state of great prosperity or great strife, the two conditions which generally produce the best music. With all of the excitement over Sweden and Japan (as well as the good ol' USA) I didn't realize how many of my recent favorite bands are Spanish (Moho, Leadershit, Cop on Fire, Madame Germen, Ekkaia, Derrota, Ictus...). Granted, many of these bands are related membership-wise, but who cares? as long as they bring the rock!
Members of Madame Germen and Nashgul (among others) have collaborated to loosen yet another beast de espana: Black fuckin' Panda! Okay, so the name is a little anti-badass/climactic, but the music is what we're concerned with here. Black Panda "market" themselves as "D-Beat Rock 'n Roll," which may serve to deter some potential fans. D-beat, for all its simplicity, used to be a powerful form of punk. But let's face it, that same simplicity, coupled with a flooded market of bands, created a rather boring sub-genre (with some exceptions). Then we have a new sub-sub-genre of bands incorporating dirty rock'n roll with d-beat, which has produced more than a few, um... awkward/forced sounding hybrids. Without further digression, I can confidently say that Black Panda has spawned a rock/hardcore mongrel that is organic sounding, raging, and downright fun! "Tanque de 98 Octanos" (Trabuc Records) is BP's Debut LP, showcasing 10 tracks of cleanly recorded, weed and booze-primed rock-core that may lead listeners into spontaneous demolition derbies in nearby parking lots, or impulsive driveby bare-assings of local authorities. To balance out the cleanliness of the recording, the rhythm guitar's distortion is "dirtified" enough to enhance the rock feel, while the lead guitar, when not spewing solos, adds a layer of higher-end picking and chords to the riffs, which create a more complex and emotion-laced dimension. And (yes!) there is a bass presence! You can really hear the bass come through, and the interplay with the guitars is pretty central to the compelling nature of the songs. Like many of the Spanish bands mentioned above, BP's vocalist(s) employs similar hoarse screams, which, while not original, seem to work with the music perfectly. So, is this "D-Beat Rock 'n Roll?" It is sometimes. But the song writing and tempo shifts are way too diverse for the d-beat label, and such a term might insinuate 'boring' for some fans. This album is anything but boring, and if you're anything like me, this LP will not leave your turntable for months after purchase.
mp3s:
"Seguiremos Fumando"
"Discoborregos"
Purchase:
Hardcore Holocaust
Posted by Batguano at 6:56 PM