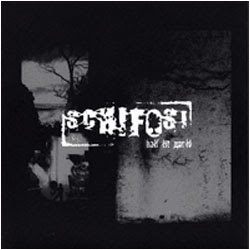 I picked up Schifosi's "Ill Winds from Outopia" LP a couple of years ago based on a one-line description. It probably used words like "dark" and "crusty," and most likely compared them to Tragedy. They have since become one of my all time favorite hardcore bands. The description was mostly accurate. The guitars are a dark, layered, and melodic frenzy, supported by what can only be considered d-beat drumming. They may start with slow, haunting intros on some tracks, but once the punishment starts you can expect fast-paced hardcore the rest of the way. Most fans will cite the vocals as the biggest distinguishing factor. The vocalist (yes, it is a woman) belts out a unique, gutteral roar that edges toward grindcore. Some gruff male vocals enter the mix, but the lead vocals are the shit! All their records are outstanding, but one really stayed with me...

The "Half Lit World" 7" is perhaps my favorite collection of Schifosi songs. All four are ragers, and two of them ("Drowning in the Aftermath" and "Law is Freedom") are the best songs the band has produced (only an opinion!). This ep brought their sound to a new level of darkness, with good song writing, and a heightened poetic sense introduced into their lyrics. Really great stuff!

Schifosi are from Melbourne, Australia, and I believe are still active. Members also play in Pisschrist and Abc Weapons (post coming soon on these guys). Although Schifosi toured parts of the US a couple of years ago and have plenty of fans here, I still don't think enough people know about them. In the future, don't be surprised if you encounter similar dark, female fronted hardcore bands on this site.

Mp3:
"Drowing in the Aftermath"

Profane Existence
Posted by Batguano at 7:52 AM