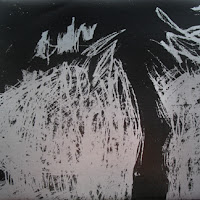 A little change of pace here: die hard crusties may want to look away... After they broke up, Ottawa's Okara released their only full length, "Months Like Years" (Spectra Sonic Sound Records). They had already put out a 7" and a split 7" with Mothman, which were very poorly produced. "Months Like Years" has some recording issues as well, but it is far better sounding than those previous outings. And, thankfully, it is their best material as well. On this monster, you'll find 8+ tracks of somewhat mathy indie rock that might find a comfortable home in DC, as well as in San Diego (in the early '90's). The guitar is raucous, jangly, and off-kilter, but the man behind it is in total control. Competing with this is the rhythm section, which brews a dizzying concoction of hyper-jazz rock that at times would feel danceable, if it were not for its unpredictability. The competition is a draw, and the product is a very kinetic, forceful, and edgy rock record. Fans of Shotmaker, Three Penny Opera, and 30 Second Motion Picture may recognize the vocalist. However, his vocals are basically the only similarity Okara can boast of with these bands. It is a shame this 3 piece couldn't hold it together for a second LP... I can only imagine how good such a record could have been. I was hoping to post their entire record, but there are still couple of copies left out there, so I wouldn't feel right doing that.