Unhinged - Win Our Freedom In Fire 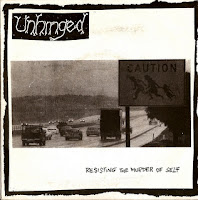 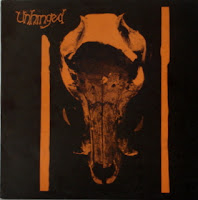 The early '90's seemed to signal a new epoch in hardcore: musicians were staying in the "scene" longer and becoming more intelligent and musically proficient, and as a result their subsequent bands were all around better too. After the dissolution of Belgium's mighty Hiatus, at least one member went on to play in the also mighty Unhinged. This band was one of a handful that kept me interested in hardcore long enough to witness the flourishing "scene" that followed and continues today. Like contemporaries Zero Hour and Initial State, Unhinged took a darker and more passionate approach to the already crushing "crust" sound, and mixed in anguished female vocals to complete their absolutely devastating assault (Direct decedents may include Ballast, Jeniger, Kakistocracy...) The song writing is relatively complex for its time/genre, as was perhaps foreseeable from the final Hiatus 12" (which certainly improved upon the somewhat repetitive sound of Hiatus' earlier work). My favorite tracks by Unhinged come from their first two records: the "Resisting the Murder of Self" 7" and the "Win Our Freedom in Fire" LP. These two slabs are driving and raw, but still controlled and smart in every way. Their final LP "Crime and Punishment" was slower and a bit slicker, and I would certainly recommend it if you like the tracks herein. Nabat Records handled all of Unhinged's releases, and I am not sure about their availability. They seem hard to find, so I am posting rips from a CD that compiles these two records and some other early tracks (thanks to a generous "soulseeker" out there).
Unhinged - "Win Our Freedom In Fire" CD (zip file)
Posted by Batguano at 4:09 PM