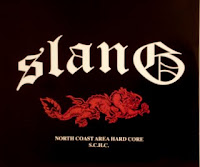 Two traditions meet in Slang. These South Coast Japanese Hardcore die-hards fuse traditional Japan-core with late '80's US east coast straight edge. If you have any doubts as to the sincerity or quality of their music, just look at the heritage of their homeland. I don't think I've ever heard a Japanese hardcore record I didn't like! These gents certainly do pull it off... and it appears that they are still together! They started off in the late '90's with a more traditional sound, and their new demo seems to be a harkening back to that. In between, "Skilled Rhythm Kills" (recorded in 2000) saw the band branching out with the more US influenced material. Combining the hard edge of NYHC with the energy and special something that makes Japanese bands so great, resulted in one heck of an album. The CD version (on Schizophrenic Records) is still available and contains some live tracks as a bonus. The LP version (see crappy photo I took of my copy above) was released on a mysterious Finnish label called Conquest Wake Records. Vinyl nuts (like me) will have to consult the ebay. Check out the tracks:

Great post, and blog. i was wondering if you would link me, i have already linked you. my blog is

Hey Seeeing Red! Thanks for commenting. Consider yourself linked! Outstanding blog, by the way.

Great post about Slang got to know about them through a Japanese hardcore sampler. But if I remember clearly well they also had a 7" out that was also very good. Keep up the great blogging!

Thanks for the kind comment. I will definitely keep blogging as the long as the comments keep coming!