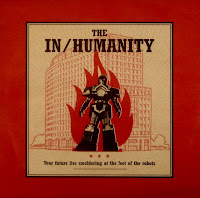 In anticipation of the In/Humanity reissues, it's time for a post of some of their out of print (and now permanently deleted?) material. The "Your Future Lies Smoldering at the Feet of the Robots" 7" is a good place to start, showcasing three "mature" and fairly well recorded tracks. For those unfamiliar with the band, they were a difficult animal to classify. Gasp, GOB, and Born Against are good starting reference points, with special emphasis on the snide humor of the latter two bands. The true origins of course, date back to the primordial soup of the early Gravity/Ebullition Records sound which blew the chaotic and creative possibilities of hardcore wide open. There's a fair amount of chaos on these tracks, but the band knows exactly what it's doing. The lyrics are brilliant critiques of our decaying world, but unfortunately the printing is too small to reproduce easily in this post. As most people know, the singer went on to form The Guyana Punchline.

As mentioned before, Prank Records is repressing In/Humanity's second full length "The History Behind the Mystery," and reissuing their long out of print first LP "The Nutty Anti-Christ" (Passive Fist Records) this fall. He will apparently not be repressing the singles collection, so in partial consolation I'll be posting three of In/Humanity's four split EPs in the next post (tomorrow?).
Download
Old Promo Poster 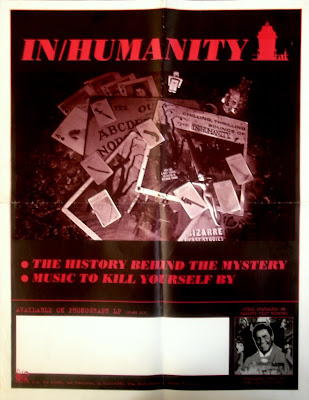 this is such a great record... in/humanity finally mastering that emoviolence genre they invented... plus the mix of the 7" sounds a lot better than the mix in their discography CD... so download and listen...!!!

nice. this is awesome stuff. I missed out on these guys.