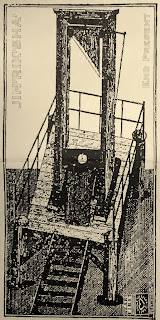 From the evolutionary graph charted by Kort Prosess and Angst came what may be a climax in the incredible Jin'Rik'Sha.  Released on the cusp of the new millennium, the "End Present" 2x7" is four sagas that could be about any number of cynical matters, but to me represent the victorious cannon blast of these musicians reaching their peak, while also laying of the first brick of the road they hoped would guide us into the next decade.  The Norwegian palm-muted savagery rears its dragon head here and there, but really "End Present" sails headlong, and with frightening precision, into the misty waters of The Modern.  While I've read some comparisons to HHIG/Tragedy, I'm not wholly satisfied by those.  If forced to find an analogous contemporary, I would elect "Conquest:Writhe" or "In Coveting Ways" era Burst.  But all great records should stand alone, regardless of context, and this one turns out to be a true, towering beacon.  While the four tracks below are the band's only vinyl output, it wasn't completely the end for the members.  Read this old post from 7 Inch Crust for more info about Jin'Rik'Sha's legacy.

By request, the Hanging Rotten link has been updated.
Posted by Batguano at 9:03 AM

Wow! I truly appreciate you posting this! A unique band from a somewhat forgotten scene. Thanks again!