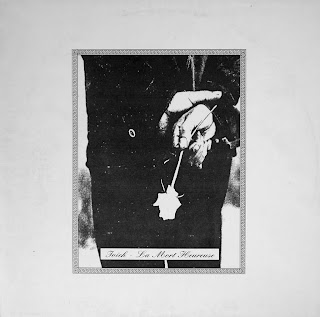 Ivich's one and only LP was a major discovery for me, right after another major discovery-- that of the Ebullition mail order list. Ivich was without a doubt hardcore, but not like I had heard it previously. In the DIY spirit, it proved to me that a band still didn't need a huge recording budget to create innovative and moving noise. It was also my first indication that the nineties experimentation in Europe was a lot heavier and less whiny than its American correlate-- two traits I still adore in these bands. "La Mort Heureuse" is noisy, messy, and unpredictable, but it's equally riveting, passionate and sincere.

You can also hear some of the band's earliest work in the 7" included below (thanks a million to the always awesome Fab!) and on the "Le Garage" comp posted a while back.

I won't be posting the 10" as it is still available from Ebullition.
Posted by Batguano at 10:15 AM