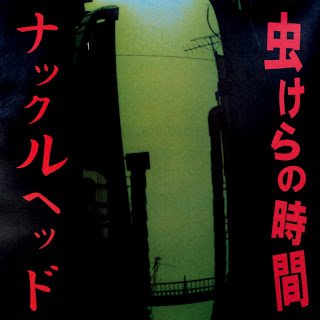 I've only got time for a quickie, so if you're as pressed for time as I am, Knucklehead (or Knuckle Head if you prefer) will only take up four minutes of your day. They'll be four worthwhile minutes, for sure. I fell hard for these grinding hardcore nuts when I found their "Gouo" 7" in a used bin (it was on MCR Japan... hard to go wrong with that label). The two-banger ripped for today was released on H:G Fact (another no-brainer there), and is a slightly earlier outing. While it's certainly fast, blasting hardcore, there's something in the arrangements that places these guys far above the generic bands that usually dominate this "genre." The vocals, which sound like the guy is hawking a Drano and razorwire loogie, seal the deal. Neato.

I can't translate very well, "mushikera no jikan" means "Time for the people on the bottom layer".
"kokyuukonnan" means "Dyspnea"

Wow! Thank you times a million!