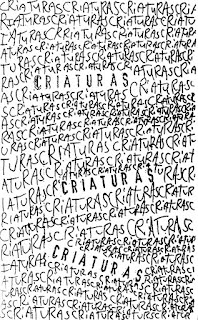 The posts this week(end) are the result of me finally locating my box of recently purchased demos and other cassettes, some of which I've been wanting to post, some I haven't really had a chance to absorb yet.  The Criaturas demo falls more into the former category, as the band's 7" and LP have been giving my turn table quite the workout of late.  While the band shares members and a visual style with Deskonocidos (another recent obsession), they don't come across as dark as their cousin band.  Criaturas perhaps share something in common with another Austin band, Sacred Shock, in that they draw from an array of impressive punk/hardcore influences, but what results is something better than merely the sum of these.  The standout quality on this outing is the sense of Cold War-era paranoia, conjured by the frantic pace of the drumming and fits of noise from the guitars, and given staying power by the way Dru sustains her shrill wails and cries.  Some exciting things have been happening in Austin, and although a lot of those "things" share members, I hope other musicians will be inspired and take up arms.

You can get wav files of the tracks here.

The band's 7" can still be found here.

The LP is available in many places, but was released by Trabuc Records, Spain.
Posted by Batguano at 10:17 AM