In Piss We Crust 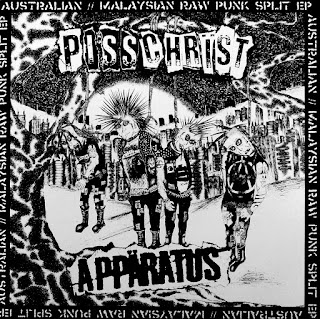 No type of noise has such an equal chance of being either super boring or super powerful as d-beat hardcore.  These days, I'm generally steered away from terms like raw punk, d-beat, kang, mangel, crasher crust, etc. due to the plague of overabundance.  But, there will always be bands than shine through the grey blur of two tone covers, and catch my waning attention.  Pisschrist is easily the shiniest for me.  These former members of Schifosi, Abc Weapons, and Far Left Limit mastered this style to such a degree I wouldn't be surprised if a hundred bands come out in the next decade with names starting with Piss-. With the small hope that you all don't already have all the band's splits, I've ripped them for whomever's interested.  The band assembled an impressive, international army of rawness to take the b-sides, enough to charge you hair without adhesives for a month at least. 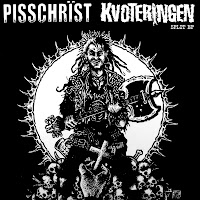 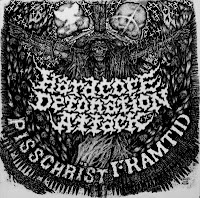 i'm just copy pasting from Distort fanzine, to help with the "conversation". The article talks about Framtid's under the ashes and the legacy that left behind with bands like Kriegshog :

"Behind and around it lay the corpses of many bands that attempted to achieve the same glorious heights, but failed -> Pisschrist never did. One could imagine Framtid intentionally crafted an inferior contribution to the split 7'' with pisschrist as some inscrutable gesture of japanese good will. Nobody else comes to mind, and pisschrist wouldn't if i didn't live in melbourne, i'm certain"

Now, i never get along with pisschrist and i don't know why. I guess, seein all the poser crusties with PC patches was the first and only annoying reason, but their music also never was such a highlight. I preferred all their previous above mentioned bands (abc weapons etc) and i still i prefer Kromosom....

Well, I'll agree that Framtid rule at this style. Now, because I don't go to shows much anymore, I wasn't prejudiced by posers so I can't speak to that whole thing. Since hearing Pisschrist's first 7", I was hooked. I'm not trying to change anyone's opinion.