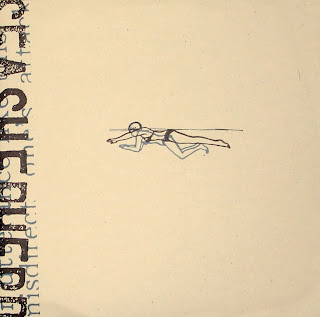 I was on a whole French '90's hardcore kick, then it was brought to my attention that the "Le Garage" comp link was not working... perfect time for a French double (re)post. Sea Shepherd's vocals remind me a bit of Ivich and Vanilla, but musically we're looking at more straight forward and fast hardcore. In fact, until you see the layout of the booklet, there's not much more to connect these guys to the emotive cadre encircling their particular time and place (other than maybe the dolphin (?) voices between tracks). Rough and fast one moment, a bit groovy the next. Very cool band that probably only released comp tracks in addition to these six (hopefully I'm wrong and some nice commenter can help out). Speaking of comps... 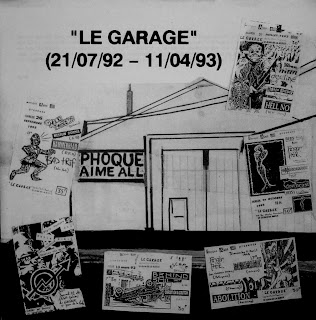 ... I posted this "Le Garage" comp what seems like years ago. It was pretty important to me back in the day as it had very early tracks from Finger Print and Ivich, who became favorites and continue to be such. There's also an early version of a Sea Shepherd track that's on the 7", a rager from Abolition, and 2 tracks from Human Alert that leave me a bit ambivalent. If you're a Finger Print fan and haven't heard "Docility," you may be in for a bit of a surprise.

Actually, there's more connection between SEA SHEPHERDS and what people usually refer to as "french emo"...
The french "emo" scene was strongly rooted in punk/hc diy political, and SEA SHEPHERDS's bass player also played in the most emo french band of this time, SHATTER THE MYTH...
French bands of this era that you shoud check out is AUTONOMIA INDIGENA...
Oh well

wow, sea shepherd 7". awesome record! thank you so much for the re upload! should be nice if you could upload something of shatter the myth or thrill of confusion. cheers!

I knew of some of those connections, but I was speaking mainly of the music itself and the fact that it's rawer and faster than that of its contemporaries. I don't discriminate... I love it all! Thanks for stopping by; I'll check out AI as soon as I can.

Huguin- No problem, man! I'll look into your other requests, but it may take a little longer this time.

Phoque aime all means Fuck em all....it was a good association which booked lot of shows in Orleans (france) in the beginning of the 90..and they started a record label (the 1 st coprod with stonehenge rec was the 1st ep of fingerprint)...There s so much (good) things to tell about le Garage in Orleans, so much good shows inside an old real 50s garage...I think one day Michel, Philippe, etc...could write what happen here.
I saw Sea sheppherd a couple of time. They recorded a tape with autonomia indigena in support of a french squatt...they played a lot...it was a good hc very fast and very raw. The ep was out when the band broke. I heard what the singer suicide....
The other band with member of sea shepherd was shatter the myth from Orleans. It was a very nice band too.
You could find everything here: http://vendetta.propagande.org/STM.htm
Just for info, everything in France restart in this garage in the beginning of the 90s.....I m happy to this on your blog.
Fab'

Wow! Thanks for sharing. That's terrible what happened to Sea Shepherd's singer.

I could always tell there was something special about Le Garage (the place). Thanks again for all the info and memories!

Autonomia Indigena were part of the same batch & their ep is also quite good...

the Sea Shepherd vocalist, Bumpy, died tragically in a car accident with some of his friends and did not commit suicide as mentioned on the previous comment.
R.I.P. bro.

I appreciate the clarification. Also, I just found a copy of Autonomia Indigena and was going to rip it. You saved me the trouble! Thanks for posting it. I will link your blog immediately!

I just remembered having this LP back in the 90's. I remember looking at and trying to recall my high school french and not understanding the title of the album.

Then I said the name out loud. And realized, OH. I get it.

Your link doesn't work now. Any chance you can upload it to 1fichier and send the link? Or upload it to youtube? Or anywhere?

The link is good now. Sorry it took forever.