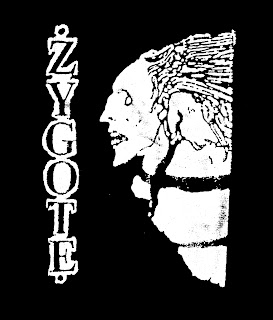 "In The Red" is a ghoulishly bouncy number by a band I can honestly say I cannot live without. But what else can one expect from 3/4 of the Amebix line up and the bass player of The Smartpils, Bad Influence, and (later) Cross Stitched Eyes? The "89-91" collection was my first exposure, but when I picked up "A Wind of Knives," track three seemed to coat the inside of my veins with a dark nepenthe of post-crust phantasmagoria. Infectious and strangely familiar, but ultimately in a class of its own, Zygote's work has been a bit polarizing to some potential fans. Many nay-sayers will still insist on comparing them to their previous band, but they really are two very different animals. I won't spend too much time trying to convince the unimpressed; Zygoted seems to be one of those "gut instinct"-type bands. 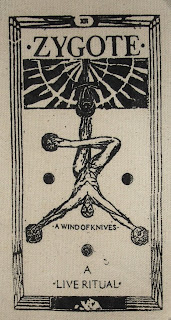 oh yes, i remember. a reason to put on this cd right and now, with the snow outside and the flew inside...

oh yes, i remember. a reason to put on this cd right and now, with the snow outside and the flew inside...

Take two doses of Zygote and you'll be fine in no time! Your visit reminds me that I need to stop making excuses and post some Lesser Of Two disks!

nice SOTW choice! i always loved their song "loveless" from the demo. reminds me of the motorhead song "orgasmatron"...oh, and thanks for reminding me how obnoxious the h100s were :)

Yeah, this post had me crankin the Zygote records for a week straight and "Loveless" struck me harder than in the past. Very cool song... a bit less heavy and a bit more... shoe-gazey than the others.