Song of the Week: "They Divide" (SSR)

Judging from the quietness around here, I suspect that everyone's summer has started off great. I hope that's the case. Mine has as well, but after just coming off of Mount Whitney everything seems so little and insignificant, including blogging. I'm trying real hard to snap out of it. Inspiration for the SOTW wasn't coming through for me either, so in these cases I throw out a song from a new record you may like... 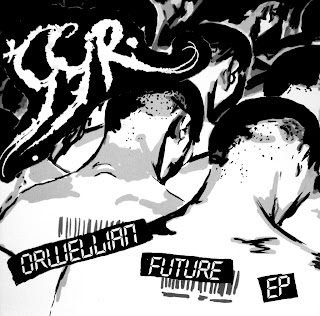 SSR (Sedition Sub Rosa) was a huge hit at FE headquarters after I picked up their LP and EP on the strength of their myspace playlist. These Richmond, Virginians are the genuine article and play fairly noisy '80's Japanese meets Scandinavian hardcore punk. Not "Confuse" noisy, but there's a deliberate lo-fi quality that adds authenticity to the sound. Like their influences, they've mastered the art of using simple riffs that stick with you, and in addition add some catchy, semi-melodic guitar leads once in while to keep their records on your turn table indefinitely. Certainly a band to look out for, although their "Orwellian Future" 7" and self-titled LP are already admirable accomplishments. "They Divide" comes from their 7" and although the tempo is much slower than most of their tracks (which are more 'd-beat' in speed), it does wonders in capturing the eerie, dystopian feel the record's title foreshadows, and it's a real crusher!

"They Divide" by SSR