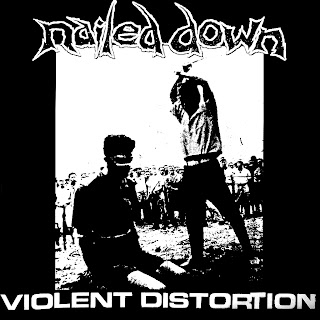 I feel like something fast today. Nailed Down circa 1995-97 fits that criterion. The obvious Lärm and Infest influence is observed in vicious collaboration with menacing Bostonian hardcore qualities and noisy Japanese amplification (made even more apparent by the band's choice of bands to cover: Negative FX, Kuro, and Confuse). "Violent Distortion" is an early example of the band's work before their sound changed a bit. On vinyl it was released as a 10" by a bunch of French labels, and Profane Existence Far East released it on 3" CD. What you get in the folder below are 320 rips of the CD with graphics from both versions of the release. 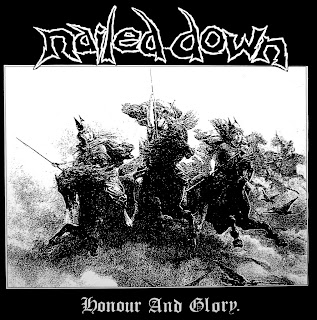 You'll also find rips of ND's "Honour and Glory" 8" flexi (Six Weeks Recs). The tracks are similar to "VD" but slightly less vicious, and a couple of raw live tracks are tacked on to the end. I did my best with the rip quality considering it's a flexi.
CD Cover: 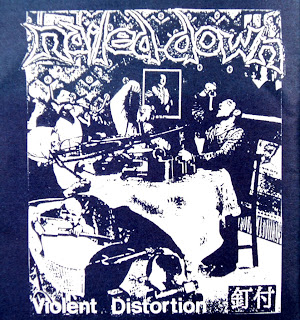 uberexcellent! one of best hardcore records ever. "downsided" era no comment meets confuse. if only the sound was a little bit better, richer.. but anyways - this record just flies by, leaving nothing but death, destruction and scorched ruins behind. fantastic spot on lyrics too. this beast of a record has a permanent place in my personal hall of fame.
roman