Song of the Week: "Only To Infinity" (Remains Of The Day) 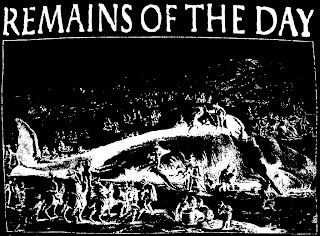 Blame them for tainting the American well with a hemlock dram of "neo-crust" if you will, but I tend to credit Remains Of The Day with playing powerful and unique hardcore (yes, they were similar to Cwill, but still different enough). I think I heard somewhere that they had a member of Hellshock in their line up, but rather than stenchy crust, ROTD opted for dramatic narratives with fast and energetic tempos (mostly), dabbed with a few slow and somber interludes. If you follow the rule that crust should be simple and straight forward, this band is not for you. But if you like it when bands tunnel across boundaries and smuggle in musical contraban, maybe you already know this band, or should.

"Only To Infinity" (ripped from the vinyl version of "Hanging On Rebellion." Buy the full album at Crimes Against Humanity Recs.)

This post should be called "Remains of the Year," as the last week of school is finally here! Hopefully this means that posting will become more regular. I'll make that a goal, not a promise.
Posted by Batguano at 5:54 AM

I am really pleased to post my comment on this blog .I love your blog by the way, I am gonna have to add you to my list of watched blogs